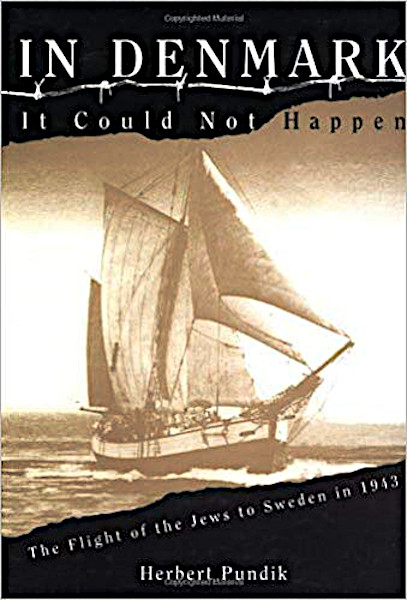 In Denmark It Could Not Happpen by the Danish author Herbert Pundik.

In the late 1990s some World War II event must have gripped me and I was suddenly all aflame, set  on finding out about the fate of the Danish Jews and their “Flight to Sweden in 1943”. Maybe my intense involvement followed upon my getting hold of Herbert Pundik’s remarkable book “In Denmark It Could Not Happen“. I was now all prepared to do thorough research concerning the big issue of Jews and World War II. I would read all the books I could find about the fate of the German and Danish Jews and then write something about it.

Herbert Pundik was in September1943 a Jewish-Danish gymnasium student in Copenhagen. He and his family managed, after a lot of failed attempts, to escape to Sweden in the early days of October 1943. He graduated with studentexamen in a school set up in Lund for Danish refugee youths. Books for the students were smuggled across the Sound. As soon as the German occupation of Denmark was over on May 5, 1945, he returned to his own country and worked on giving help to those in need. He went on to become a political columnist for the leading Danish newspaper Politiken, for which he was the executive editor for over twenty years.

I got in touch with Herbert Pundik through his publisher and we exchanged a few letters. He lived in Tel Aviv and was still writing his excellent columns for the leading Danish daily Politiken. He was in fact editor of the newspaper.  He actually commuted weekly between Copenhagen and Tel Aviv for many years.

Once, some time in the late 1990s, I was supposed to get together with Herbert Pundik and his wife in Paris. However, I was not feeling well at all, and sadly I could not make it.

Among other literature I managed to get a Swedish library (Uppsala University Library, I believe) to send me copies of two research papers about Swedish Nazi political parties in the 30s and 40s. There was one National Socialist party for the upper classes, another one for the working classes, and, I believe, a third party that completely followed the line of the Third Reich Nazi party. I had known nothing of established Nazi political parties in my own county.  I was shocked and, well,  I was learning a lot.

I managed, even though with quite some difficulty, to get hold of all the books I wanted to read. As it seemed impossible to get hold of one book in Danish that I wanted, I appealed to Herbert Pundik who lent me his copy.  He later let me know I could keep it since he had managed to get a copy from a friend.

Herbert Pundik was writing famous columns for the Danish newspaper, Politiken. At one point in the negotiations for a humane solution to the Palestinian problem, things seemed so hopeful that Pundik wrote a column in Politiken, titled “Det dagas i øst”. (There is a dawn in the east).

After the failure of all the various peace talks, some of which Herbert Pundik participated in and had helped organize, I was feeling so frustrated about the entire period of hope and betrayal that I felt there was nothing I could say to my Jewish friend. We never got to see the dawn in the east and I will never forget the sadness I felt as I realized how full of hope Herbert Pundik had been, no, we had been , and the shameful betrayal by Bill Clinton and Ehud Barak at the Camp David summit.

Ehud Barak was the Israeli Prime Minister in 2000, and many of us believed, naively, as it turned out, that the hoopla at Camp David that year might lead to something positive in the Israeli-Palestinian conflict. These peace talks were aimed at finding a humanitarian solution to the situation in the Middle East, Israel versus Palestine. The meeting was all for show and ended in total failure. 1

The big bosses soon after Camp David, minus Bill Clinton, tried to revive the peace talks at the Egyptian resort Sharlm el- Sheikh on the Red Sea. However, when these negotiations seemed to possibly have a positive outcome for the  Palestinians, Barak got cold feet and returned in haste to Tel Aviv. It had all been a big show and nobody sincerely wanted a peace solution in favor of the Palestinians.

It had been hard work getting my hands on the books I wanted to read. One book could only be found at Lund University Library and I had to give my sister Gun’s name  and position as a university teacher to be allowed to take out the book.

I read books and articles in Danish, English, Swedish and even one little nook in German. I  wanted to get the background to this horrible Holocaust, or shoah in Hebrew — meaning calamity. How could this happen without the governments of surrounding nations standing up to the Nazi monster? Well, first of all because lots of the major nations in Europe as well as the U.S.A. were eagerly doing business with Germany and so they actually prospered from trade with the Nazi government. It was simply in their economic interest to let Nazi Germany have its way. For sure, or so they thought, the Germans were not seriously planning on taking over the world.

The British Prime Minister, Neville Chamberlain came back from the Munich conference with Hitler in 1938 with the message “Peace in our time”. Hope never dies, but could the world not really see what Hitler and the Nazi top men were up to? This Munich Agreement took place in September 1938, after the German takeover of Czech Sudetenland. That was the first Nazi territory takeover.

It was not until Germany on a false pretext invaded Poland on September 1, 1939 that the United Kingdom and France, on September 3, declared war on Germany.

The big question in my mind was “Who, if anybody at all, was trying to protect the Jews?” I have written a lot about this in my Chapter 6 — (Part 1) but I have not dealt with my studies and my vague plans on writing a book about it..

The ‘establishment’ Jews in Copenhagen, as in Stockholm, kept a low profile. They did not stick their necks out in defense of their Jewish brothers from a lower social level, when darkness fell. Jews were pouring into Denmark from Germany where they had often made an interim home on their way from somewhere in eastern Europe. These Jews were left without much support from the established Jewish community, if any, and they had no passports or official Danish nationality.

Many Jews tried in the most desperate ways to get to Palestine — Israel not yet existing of course. A sizeable Jewish community was already building up in Palestine, long before 1947.

However, until Hitler changed his mind on the fate of the Danish Jews, in September 1943, most Jews were not seriously bothered by the German occupation.

On the eve of Rosh Hashanah — the Jewish New Year, the Danish Jews, following Hitler’s new decision, were to be rounded up and then sent to Theresienstadt concentration camp in former Czechoslovakia. As it happened, only a small fraction of the over 7000 Danish Jews were caught by the Gestapo and the German police on that fateful night of October 1, 1943.

A Jewish organization in Berlin worked wonders on helping Jews escape from Germany. However, the boats they depended on for their escape suddenly had no country to go to. UK declared that they could not take in more Jews, the U.S.A. did the same. Boatfuls of refugees were sent back, after waiting , in at least one case, for weeks off the coast of the southern United States for permission to set their refugees safely on shore.  They finally had to return. Some boats ended up going all the way to China to seek a peaceful haven.

Some Jewish families made it from Denmark over to Sweden before October 1943,, but, to the eternal shame of the Swedish authorities, they were forced to go back to Denmark. The Swedish stand previous to October 1943 was shameful. We were so anxious not to annoy the Germans that we became collaborators, bending over backwards to reassure the Nazis, so as not to risk being another occupied country.

There were, in fact, not even enough Gestapo and German police for Denmark, and clearly there was no way the Germans could have undertaken an occupation of Sweden. And why should they? Sweden was doing their bidding. But the Swedish coalition government under Per Albin Hansson did not see it that way. They were too cowardly and it took the virtual defeat of Germany on all fronts to get the Swedish government to see that they were not running any risk at all. So Sweden did not welcome Danish Jews and resistance workers until after October 1, 1943.

One of those days at the end of the 1990s I was talking to friend Inger  on the telephone to congratulate her on her staging of the opera “The Rakes’ Progress” by Stravinsky at Malmö Opera, and she just asked in passing, “So what are you up to these days?” I told her I was fascinated by a project I was working on about the fate of the Jews during World War II.

She said “Yes, that’s what everybody does.”

However, Inger’s words killed my enthusiasm, and that was the end of my fascinating project. It died right then and there. This took place just a few years after the fiftieth  anniversary of the end of World War II, and so my friend may well have been right. However, it was not just the betrayal by Barak and his return to Tel Aviv post haste when a positive outcome was on the horizon that made my heart shrink and get me to lose my enthusiasm for my project.

As an after comment I should say that my phone call to Inger was badly prepared since it seems that her production of this opera was not at all a success and has left no traces on the Internet. So it was actually my goof.