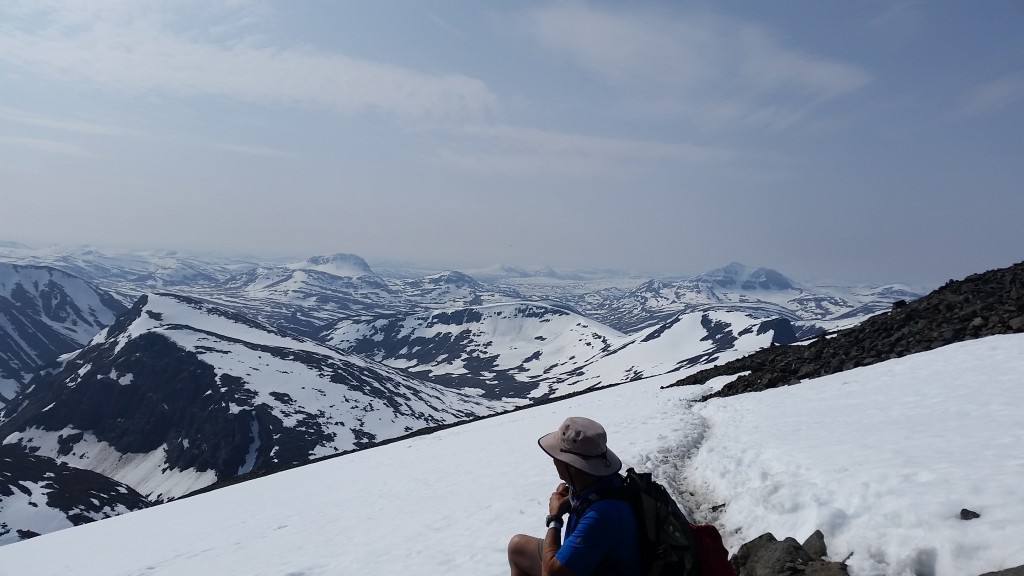 View west from the western slope of Kebnekajse, over the mountains in Norway. The Norwegian mountains were a fairyland of white snow in 1947. (Katie Malik)

After the reindeer branding, it would be hard to find an event that could even seem equally spectacular . However, the arduous but fun climbing of the south peak of Kebnekajse two days later was an adventure that I will never forget  We started at the tourist station at an altitude of 690 m and the peak of Kebnekajse was at the time 2123 m. The south peak of Kebnekajse is topped by a glacier which is about 20 m thick, but it keeps melting so it gets lower in most years. The south peak is now (2020) at  2106 m above sea level, but with the global warming that we are experiencing it is certainly going to get even lower, until the glacier is completely gone. In fact, I am now learning (2021) that the north peak is now the higher at 2009,6 m altitude. 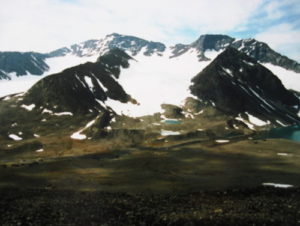 For the first 500 meters up, there was what we call rough blockmark, which is boulders and big rocks that you skip on, from one block, somewhat flat, to the next. This was similar to what we had been walking on when, a couple of days earlier, one of us saw that the mountain was moving. The mountain was across the valley on our right and on the west side of our ‘path’ — den rösade leden — where cairns have been put up to indicate the ‘path’. The walking was strenuous but fun. After the change in altitude of 500 m on rocky ground, we got to the huge glacier, named Björling’s glacier after the first Swede who climbed the mountain in 1889.

There were frequent cracks in the ice, and the guide had to help us across those. He held out his hand or his walking stick for us as we jumped over the crack. I am sure Arne managed thanks to his long legs.  Mine were a lot shorter of course and I can still remember seeing the guide holding out his hand for me, as I jumped across.  This sight has become etched onto my retina.There was safety in that hand. 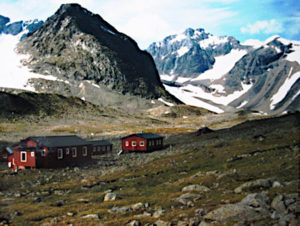 After the glacier came väggen, the wall. As I remember this, it was just a more or less level but narrow ridge along the side of the mountain, a sharp drop on our right. I do remember how we walked very carefully, holding on to a cable in the mountain wall, and it was recommended not to suffer from vertigo

This is the way I remember it. However, having watched a video about the climbing of Kebnekajse, it seems that my memory betrays me a bit. Walking on this ridge was probably more unnerving than I remember.

But once at the goal we had this feeling of being on top of the world, looking from above over the vastness of the snowy world that surrounded us as far as the eye could see. It was an incredibly clear day and the view over the high mountains looking west into Norway was breathtaking.

You could see an infinite distance, peak after snowy peak – a fairyland in white. There was obviously much more snow on all those mountain peaks in 1947 than there is today, and the view was just about the most amazing and unforgettable mountain world I will ever see in my life. Both peaks of Kebnekajse were in the sun and the world around us had opened up as I could never have imagined it to be possible. The  mass of white peaks in Norway were glowing in the su —  a sight that nobody will ever see again after the global warming that has taken place since then. We were extremely lucky since the peaks of Kebnekajse are very often shrouded in clouds.

Fjäll is the Scandinavian word for the mountains above the Arctic circle and they are mostly covered with snow even in the summer. Today, alas, that spectacular view into Norway is no more. A lot of the snow has melted and even the glacier at the peak is not nearly as wide or as high as it was in my day. The peak glacier, now called the ‘comb’, because of the sharp ridge in the center, was also at the time much flatter and I can’t believe anybody felt insecure when walking up the last 50 meters or so.

Also, the way I remember it, it was not really considered a feat to climb Kebnekajse even on the eastern path. But it seems to have become so. Things must have changed since that long-ago time. For one thing people are now linked together by rope, which we were not.  As far as I know though, nothing has really changed, aside from the glacier at the peak, which has now become a sharp comb. Also, I have of course no idea how the deep cracks in the Björling glacier have fared. Have they maybe filled up with melting ice and snow? They were quite impressive in my days.

Kebnekajse is far above the Arctic circle and the scenery does not even remotely resemble the green Alpine mountainsides in the summer. Here we were in an Arctic landscape and there was snow and ice to be seen all around from the peak of Kebnekajse on that exceptionally sunny day.

Climbing the peak of the highest mountain in the Rätikon Alps, Schesaplana, about 3000 m, is a totally different matter. It looms above Brandnertal in Vorarlberg, and John and I climbed in 1986. We were in a cloud at the top that time, but even without the cloud this is a totally different world, a partly green world, and of course rocks. The cloud didn’t matter too much. The climb had been wonderful, strenuous but fun, 1000m from the level of the top of the cable car that took us up to the Lünersee, the beginning of many of our hikes in Austria.

One thing that adds to the pleasure of it all on a mountain climb is Austria is the Gemüt at the top. Everybody talks with everybody, exchanging things and laughing happily. And we sit and eat our sandwiches, admiring the scenery, usually mountain ridges gradually disappearing into the haze. We knew it well from other lower mountain tops — Südschafgafall and Saulakopf come to mind, one mountain ridge behind another as they disappear in haze and distance.

On our climbing to the south peak of Kebnekajse, this fabulous mountain, we were not alone. A guide is required and there were quite a few more people in the little group as well. You don’t climb up on Kebnekajse all by yourself unless you are a very well trained mountain climber. On the way down the guide also gave my somewhat exhausted stepfather Arne moral as well as physical support. I remember well how the guide said I was skipping like a mountain goat. I was, at 14, the youngest person who had climbed the mountain that year. The oldest one was a woman from Nikkaluokta, close by,  who showed up every year for her climb. She was 75.

Maybe I skipped just a bit too much, because I suddenly found myself rolling and rolling down the somewhat sloping glacier. I had no idea what to do, until Mother screamed. Then, instinctively I flung out both arms and I stopped. I was quite close to some kind of edge, but I was not curious enough, after that fright, to go and take a look at what was below that edge. What I really remember of this would-be disaster is flinging out my arms.

In those days people were not so picky with a special outfit for every sport or athletic activity and I remember well how we were all just wearing our ski-boots and ski-pants on chilly days, otherwise shorts. Ski-boots in those days, it has to be noted, were quite supple boots and easy to walk in, and ours got pretty soaked after crossing swampy areas. There were no wooden planks laid out on Kungsleden at the time, and the first time we had those comfortable boards was from Kebnekajse tourist station to Nikkaluokta, on the day after our climbing Kebnekajse. After the hiking our boots had been through, they were pretty worn out, and as my sister Gun and I slid down on our behinds from the top of the snow-covered peak, Mother and Arne were watching with big laughs and Mother later photographed the soles of our boots which had big holes in the soles, as we were lying face-down on the ground. The trekking from Abisko to Kebnekajse, via the tiny Singis hut and walking uphill and downhill, following our Sami friends to get to the unforgettable reindeer branding — this all finished off those ski boots.

Note: In 1889 the 17 year old Johan Alfred Björling climbed to the south peak using the Western trail. He thought he was the first one to reach the top but it later turned out that the Frenchman Charles Rabot had done it already in 1883.