Three years later we came back to Lapland and spent first one month in Kvikkjokk, further south than Abisko, in a little red house with one room and a kitchenette that was part of the STF tourist station. We cooked our own food and did our shopping at the general store in the village. It was a good walk, but that’s what we needed to prepare us for what was coming. 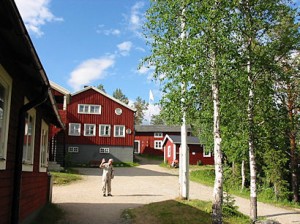 Kvikkjokk Tourist station the way it was in 2003. The little house we rented for a month in 1950 can be seen through the birches. John is waving at me from the courtyard. All the pictures in this chapter were taken by John and me in 2002 and 2003.

After that month, Arne went back to civilization, having had enough of trekking the first time in Lapland. Mother, Maja and I set out on a two-week trek around Sarek National Park, one of the wildest and most scenic mountain areas in the world. Each one of us was carrying over 20 kg on our backs.

We started out on the light climb from the tourist station into the birch forest, provided with birch branches to fight off the mosquitoes. Kvikkjokk is a mosquito paradise and I vividly remember a white wall in the laundry room that was black with huge mosquitoes.

To begin with, we were headed for Saltoluokta on a four-day trek. This part of Kungsleden is far less well known and visited than the piece we hiked on in ’47 and it’s sheer magic.

After two days of that first leg from Kvikkjokk to Saltoluokta we arrived at Aktse. This is one of the main entrance places for those strong people who dare get into the magic Sarek massif, carrying tents and sleeping bags. Unless they have a guide who carries the tent, they end up with 40 kilos on their backs. But that was then and probably tents and everything else has become more light-weight today. Sarek National Park is protected and there are no huts or shelters of any kind. 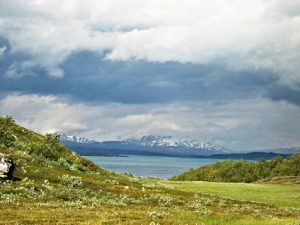 This is the closest I can get to a picture of Sarek — taken from Prinskullen (a small mountain), close to Kvikkjokk in 2003

The view from Aktse over Rapadalen with its delta is unique. There is a delta in Kvikkjokk too, but the Rapa valley is truly breathtaking. Unfortunately Mother’s photos and films were lost, but here is a Youtube link to a video of Rapadalen.

After crossing Sitojaure (jaure=lake) by boat which had to be rowed across from the other side and is run by some Sami people (you pay obviously), we arrived the next day in Saltoluokta, one of the most beautiful places in Lapland, with a wonderful tourist station overlooking gorgeous Lake Langas. 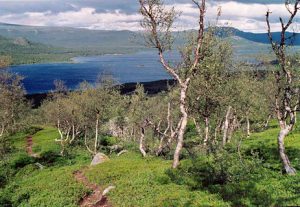 A view of Lake Langas, part of Stora Lulevatten, seen through the birch forest from above Saltoluokta tourist station

Already in 1950 it was a comfortable place as compared with the huts you had already stopped in on the way. I do believe food was served already in those days. There are several houses now, one for hikers who prefer to cook their own food, and a couple of small ones (ours in 2002 and 2003, called Laponia for instance) for more spoiled people who want beds with sheets. In 1950 we didn’t stay around, but went up the chain of lakes called Stora Lulevatten. Today you go by bus, but in those days the road on the northern side of Lake Langas didn’t exist yet. So boats.

We first took one boat to Suorva Kraftstation (a power station, alas! But hydro-electric power is still cleaner than most other kinds of electric power) with a small tourist station where we had lunch. There we changed boats, necessary because of the falls that had been made into a power station.

This boat took us along all the way to unbelievably wonderful Vaisaluokta. It was a Sami village, most complete with the most beautiful timbered church I have ever seen. There is still one in Staloluokta which we were going to get to, but not nearly as big as this one. You had a feeling of awe because of the simple beauty and the high ceiling, the light-colored fresh wood and everything just exquisitely beautiful and simple. There were reindeer hides covering the floor to sit on.

We were so impressed by the friendliness of the Sami people, men, women and children, that we decided to spend a whole day there. A Sami woman who looked quite old and who was probably not young, a kind of tribal mother, invited us proudly to come into her huge hut (kåta in Swedish). There was room for a whole family there with several children – AND she had a Singer sewing machine. A treadle one obviously since there wasn’t any electricity.

We too spent the night in a Sami hut, sleeping on reindeer hides that covered a bed bottom of soft birch branches on the floor. We cooked our food in a huge pot hanging on a chain from the center hole in the ceiling over the hearth in the middle of the hut.

We spent a day just walking around talking to the locals and taking pictures (which have been lost, alas!). The old woman let Mother take pictures of her, even though we had been told that the Sami people believe evil spirits will get them if they have their pictures taken. It was a day that will never be forgotten.

The saddest thing about this is that the whole village was burned down a couple of years later, by a madman, as far as anyone knows. It was never built back up.

It seems clear though that the beautiful Sami church was in fact spared. There are new pictures to be found of an old church that looks very much like the one we saw in 1950. Today, there is an STF hut in Vaisaluokta and also in Kutjaure, where there was absolutely nothing when we took the boat from there.

After a day in Vaisaluokta we waved goodbye to our new friends and set out towards Staloluokta. This was to be the point of our two-week trek that made me insist on going back to Lapland with John later on, after all our summers in the Austrian Alps. Both these places have since then become summer Sami villages – no more with Sami huts, but with wooden houses. We know that now it’s possible to buy some kinds of food, smoked trout and pita-like bread in Stalo and probably also in Vaisaluokta.

In those days there was no trail from Vaisaluokta to Staloluokta and this enormous area, possibly the most wonderful wilderness area in Europe had not yet been made into the Padjelanta National Park, which is now the largest national park in Sweden. It covers the area from the western end of Sarek National Park all the way to the Norwegian border. Since there was no trail, what you did was take the boats run by Sami people from Kutjaure. That’s the place we took the boat from in 1950.

I remember vividly how, on our hike from Vaisaluokta, we nearly got lost in the swamps until we finally realized that we had to turn around and try another ‘path’, but in a bog we did find a beautiful reindeer horn that we carried home with us, to be mounted over a door at home. After a few hours’ hike we finally got to the boat dock – just in time for the departure. It was a bit unnerving, and naturally there had been no sign telling us ‘this way to Kutjaure boat landing’.

This unique boat trip with a couple of other passengers took us first down a river to Lake Vastenhaure. After that first half of the trip we walked across a spit of land and changed to another boat from the northern end of Virijaure. The whole crossing took a few hours and we arrived at Stalo towards the evening. Vastenhaure and Virijaure are called the Great Lakes of Lapland and they go all the way down to Stalo very close to the Norwegian border.

A photo taken by friend Ulf Hörding, guide in Kvikkjokk in 1950 and a wonderful photographer. This is most likely a picture of a tent next to Virijaure in Staloluokta. Thank you, Ulf.

The Sami hut where we were going to spend the night was already occupied when we arrived. No problem – there was room for us too. And we made the acquaintance of a gentleman who was so much in love with Stalo that he just had to come here every year for a few days to get cleansed from the noise and dust and ugliness of the big cities. To get peace in his soul for another year. Virijaure has rightfully been called the most beautiful lake in Sweden.

We stayed in Stalo for a full day and we felt we could sit there eternally and just let the calm and beauty of the place seep into our souls. This was a world I’d never known. This was my dreamland. I felt I could stay right here forever watching the line of snowy mountains on the far side of the lake, in Norway, and the changing colors on the water.

The next morning we had to set out on the last leg to get back to Kvikkjokk where we had started our trek around Sarek. The first day would be a long one, thirty kilometers, all the way to the Tarraluoppal hut, since back in those days there was no STF hut closer to Stalo.

We were going to experience a type of flora in Tarradalen that is absolutely unique in Sweden. After the first long day to Tarraluoppal you get into birch forest and you are in the Tarra valley. This unique valley has a micro-climate that makes usually knee-high flowers grow to be sometimes over two meters high. It was truly amazing. Monkshood or wolfs bane (nordisk stormhatt, Aconitum lycoctonum) and equally enormously high queen Anne’s lace (hundloka, Anthriscus sylvestris) are the plants I particularly remember. They were actually towering over us. Also, of course, there were globe flowers (smörbollar) and rosebay willowherb (mjölke) everywhere and masses of fern in this birch forest. We felt as if we were hiking through a sub-tropical valley. Yet, on both sides there were high mountains, since we were walking very close to the southwestern border of the Sarek massif.

It’s a good thing one more hut, Tuottar, has been added on that long stretch.

The stretches after Tarraluoppal were of more normal length. Our only problem was that we were running out of food. In those days there was no place where you could buy food. Things have indeed changed! I remember that the last day we cooked some kind of bread (we obviously had brought some flour – strange!) on an open fire, mostly flower, water and a pinch of salt I guess. A very good friend of mine, wonderful Aina, who was an inveterate girl scout had taught me how to make that kind of bread on a stick and now it came in very handy. We were surrounded by cloudberries as well and ate a lot. So pinnbröd and cloudberries were our diet on the last day.

The trek from Njunjes to Kvikkjokk isn’t very far, so we got to the tourist station, to a comfortable room with a BATH and real dinner, all in time before going to bed pretty tired that evening.

The biggest adventure in my life was over. But never to be forgotten.

Continued: Chapter 4 – My youth and the theater