On a sunny day in June 1892, a little girl with her governess came walking down a road in the countryside north of Stockholm, approaching a gate. The road was bordered on both sides by flowery fields filled with summer blossoms of all colors, buttercups gleaming in the sun, daisies and blue cornflowers.

The gate boy opened the gate for a grand coach with noble armor on the doors coming towards them. He deftly caught the coin that was thrown to him. The lady and the child stepped aside and waited for the coach to pass by. Inside it was the king of Sweden, Oscar II. He let his valet know that he wanted the coachman to stop as he looked out at the little girl who was carrying a bouquet of white flowers – in perfect harmony with her white muslin dress. 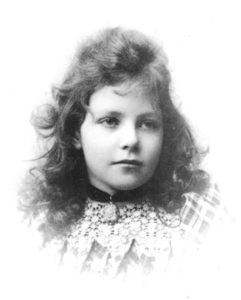 Gerda about the age she was when meeting King Oscar.

King Oscar leaned out the window and asked the ten-year-old girl what was the name of the flowers she had picked. The governess whispered something in her ear and she said to the King.

“They are marguerites, Your Majesty.”

“They are very beautiful” said the King. “And what’s your name, my little girl?”

“I am Gerda Julius from Stockholm. Your Majesty would do me a great honor if he would accept my flowers as a gift from one of his loyal subjects”, she said bravely. The King smiled happily and held out his hand to receive the bouquet of white daisies. He put them next to his heart and bowed to the little girl who had been taught to call them marguerites.

One day, later on, Gerda was walking with her mother on Kungsgatan in central Stockholm. They were passing by the Hay Market when a nice two-horse carriage stopped not far from them. A man they knew well helped a very beautiful lady out of the carriage. The lady was wearing a deeply décolleté dress and she had long ostrich feathers in her hat. Gerda thought she looked lovely.

She looked up at her mother and said “Mama, who is this beautiful lady and why don’t we invite her to our house?”

Her mother said “Hush, you’ll understand when you get to be older.”

Young Gerda’s father was a very busy man and he rarely took the time for vacations, but her aunt and uncle in Sundsvall in northern Sweden used to go on long summer sojourns on the continent. Since they had no children of their own, they often asked Gerda’s parents if she could come along with them. They mostly went to France or Italy.

One day the aunt and uncle and young Gerda were in a restaurant in Cannes waiting for dinner to be served, when suddenly a waiter came up to their table with a silver tray, bowing deeply and offering them a message from another table. It said “May I have the honor of knowing who the ravishing young lady is at this table?” 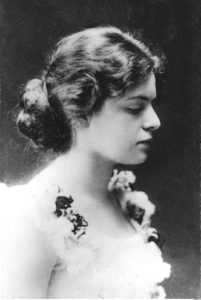 Gerda’s parents were in no hurry to see their beautiful daughter married off. They loved her company and Gerda herself was always busy studying, traveling, reading or going to the Stockholm opera or the theater.

When Gerda was 24 years old, however, she fell in love. The young man was a handsome officer at the Regiment of Bohuslän who also had a business in Stockholm. Officers in those days were only in service during the summer, and to make a living they had to depend on their family’s money or run a business of their own. Young Axel’s father was a vicar in Värmland in central Sweden and they were not rich. But Gerda was in love.

Her parents may have wished for a more suitable match, considering their own social standing. However, Mrs Julius had a warm heart and she convinced her husband that Gerda’s happiness was the most important consideration. She reminded her husband that they would leave both Gerda and her brother with enough of a fortune to be provided for even if Axel’s business wasn’t going to prove very remunerative.

The marriage took place and the couple left for a honey moon that was going to last all winter. They rented a house in Argenteuil, a town west of Paris, on the Seine. When they wanted to go to Paris, they were taken by boat on the Seine. It took less than half an hour and it was such a beautiful trip along green riversides, willows hanging their branches over the water and plowed fields intermingling with small forests. The year was 1906 and motor boats had come into use.

But the winter got to be chillier than they had counted on and Gerda one day asked her husband if he would go to Paris to buy her a warm robe. She was expecting their first child. Axel exuberantly went to a fancy store and came back a couple of hours later with a dream in white lace. A photo remains with the young mother leaning over her first child and wearing the beautiful négligée. Axel most likely went to Le Printemps, asking for a beautiful nightgown for his young wife. This picture was taken after they arrived back home in Stockholm, some time in the late summer, with Arne as a newborn baby. The young father’s folly became history — through this photo. Gerda felt chilly in the French winter but her loving husband bought her a dream in lace.. 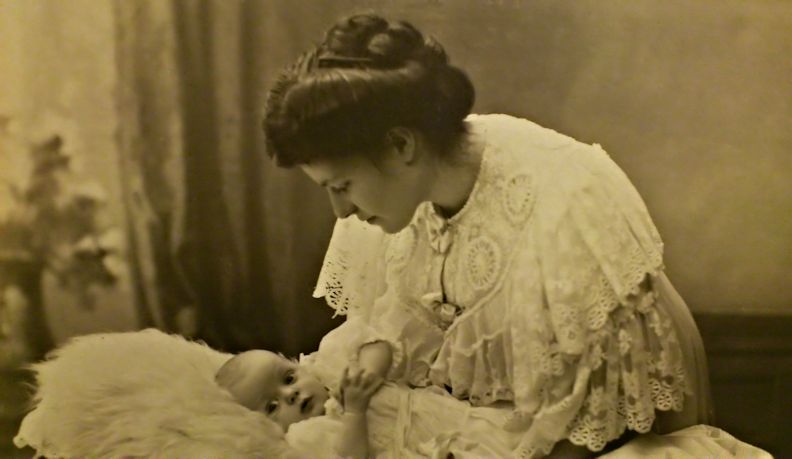 Tante Gerda in the négligée her husband Axel bought for her when Gerda was pregnant and complained of feeling cold.

The couple left Argenteuil for Stockholm when the summer approached and the child was born on July 21. It was a boy and he was called Arne after a very sweet Norwegian little boy the couple had become acquainted with the year before.

Their summers were spent in Bohuslän on the west coast, where they lived on an island off the coast of Uddevalla where Bohusläns regemente was located. They had a chauffeur who took them by boat to Uddevalla when needed. The rest of the year they lived in Stockholm where Gerda had her family and friends.

Axel, however died when Arne was still just a youth and Birger was seven years younger. There was also a daughter, Märta, who died from cancer in the early forties.

Tante Gerda lived in a big apartment on Karlaplan until her younger son left home for good. She then moved, with her housekeeper, Dagmar, to Banérgatabn 42, a smaller and much more modern apartment, and that’s where I knew her. Dagmar eventually moved back to her Värmland, got married and opened a laundry business. Before she left Tante Gerda, Dagmar had a little room behind the kitchen which I often occupied after she had left. She was always called Dadda by my cousins, Maud and Agneta, Birger’s and Anna-Brita’s daughters, for whom Dagmar often babysat.

Tante Gerda came to mean a lot to me. All through my adolescence and early youth, it was always festive when she came to visit. Especially during the five years Arne’s brother Birger with wife Anna-Brita and daughters lived in Greenwich Connecticut, she spent Christmas with us and I so much appreciated her great sense of humor.  We had moved to Nyköping then and it was always more Christmas when Tante Gerda was with us.

Tante Gerda also took me under her wing, more and more when I was a student at Lund University, and even more so after Roland’s and my separation in 1961. I got to feel very close to her

Continued: Chapter One – My  Childghood

2 thoughts on “Prologue: A look back in history”