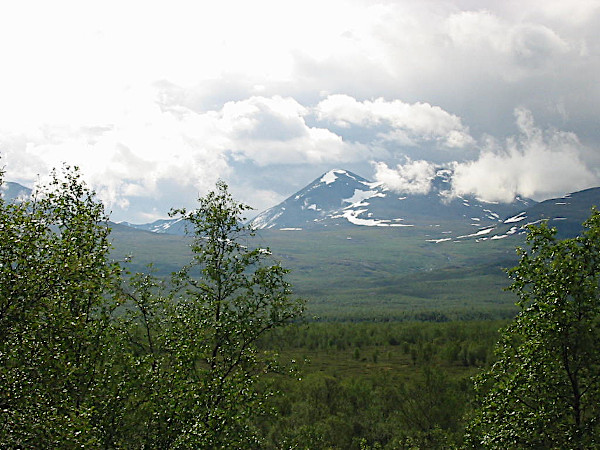 We met two friendly Sami fellows in the midst of a moor on our way from Sälkastugan (stuga = hut) to Kebnekajse.1 We got to talking, standing there on the level plateau, the way you do when you meet people just about once a day — if at all. You meet other people of course in the STF cabins at the end of the day’s walk, but very rarely during the day, at least way back then we didn’t. The two Sami men were big reindeer owners (one of them named Blind, I believe) and they told us the reindeer were being rounded up and had been over the past few days for the branding that very night. They offered to come and pick us up in the evening if we would go south to Singistugan instead of going easterly to Kebnekajse tourist station.

They showed up, as promised, just as we had finished our very light dinner, cooked on the smallest stove we had ever cooked on. It was a heating stove, not really a cooking stove. Today Singis has two huts and they are certainly a lot more comfortable than back in those days.

The mountain is moving

The two men gave us the explanation for the wondrous experience we had had earlier that same day. We had been heading south, walking on the eastern side of a long valley with a long abd low mountain side on our right across a valley. There was ragged ‘blockmark‘ (nothing but big rocks) to walk on for kilometers and you had to pay attention to where you put your feet as you skipped from one rock to the next.

I suddenly looked up at some point though and exclaimed in wild surprise – “Look, the mountain is moving!” All four of us stopped and looked. It was a sight one never forgets. The mountain side to the west was completely covered with stately reindeer running at a steady slow pace towards the south, the huge herd most certainly held together by the Sami huskies who are masters of the art of rounding up reindeer and taking them to wherever they are supposed to be going. (Today – how sad ‘progress’ can be – this is done by helicopters!) The sight was breathtaking. It was almost unbelievable, like a dream. The mountain was moving. And still there was silence. We couldn’t hear the dull thunder of their hooves from this distance – we just saw the moving mountain and the beautiful horns and bodies of the animals .

Singistugan and a wild walk

As the two Sami reindeer owners arrived that evening, we set out on a wild running walk across plateaus and uphill, downhill, for quite a few kilometers to the site where the reindeer branding took place. In Swedish it’s called renskillnad, which means the separation of the reindeer – separating them, that is, according to their owners.

My stepfather, Arne, who has never been very athletic, had a hard time keeping  up with the pace, and Mother had slowed down to keep Arne company.  We asked our new friends if they could possibly slow down a bit. They looked at us all surprised and said “But this is slow walking!”

At last after what we really felt had been a constant running uphill and downhill, we finally saw below us the area that was set off for the branding, the steep mountain wall on one side, a lake on the other side. It was astounding how this place was like made for the purpose. At the back end of the enclosure there was, I believe, a wall.

As to where exactly the branding event was, I am not at all sure. I look for a site on my map between a mountain drop and a lake and I find a lake called Jierttajaure (jiertta = the round mountain; jaure = lake) which could well have been the place, which probably indeed was the place, a few kilometers east of Singistugan at the foot of Unna Jierttas (unna = small – so the small round mountain). All the names in this part of the world are in the Sami language, not in Swedish.

The Sami people don’t wear heavy boots, the way we do. They make their own leather shoes from soft leather because, so they say, they have to be able to feel the ground under their feet. Since the path very often is not visible to the eye, the Sami people say they can find it with their feet. In the winter they travel enormous distances on ski and with sledges for provisions, huskies pulling the sledges. The bindings that attach their shoes to the skis are simply leather straps, the same as my first skis when I was five years old.

We were told later by the hostess at Kebnekajse Tourist Station that the two reindeer owners we had made friends with were just about the richest Sami men in Lapland, a Sami’s wealth being determined by the number of reindeer he owns. The two men owned each one thousands of those stately beasts.

The night of the reindeer branding

It is an understatement to say that it was the experience of a lifetime. It was an event that will stay forever clear in my mind – the colors, the shouting and the movements throughout the night that was as bright as the day just before sunset, and the never-ceasing sound like distant thunder of the reindeer – running, running in a circle, their hooves drumming on the muddied ground.

The branding area was closed in on three sides, as already  described, and, at the entrance where we were, by wildly barking dogs, six of them maybe, tied to posts linked together by ropes all across the opening, some stray pieces of clothing hung over the posts. Whenever a reindeer stole off into freedom, a dog was let loose in pursuit of the runaway. The husky would drive the reindeer back into the fold in a couple of minutes. It was an amazing sight.

Lassos were doing their wild dances in the air throughout the night, and the cries and the movement never ceased. It was extraordinary to watch the rope settle around one tip of the horn of a female deer with her calf running close to her in the steadily moving circle. It will forever seem like a miracle how a reindeer owner could recognize one of his own deer from the closed circle of stately and steadily moving animals.

The calf is thrown over on its side, out of reach from the ongoing motion beside them, and the man clamps the calf to the ground with his legs and brands his mark onto the calf’s ear. The process did not at any moment give an impression of cruelty towards the proud beasts. What will always stay with me was the force of nature and the grace of the animals. Right after the branding, the mother and the calf would again join the running circle of the other deer and the thundering hooves.

The Sami people follow the reindeer, and so in the summer when the reindeer travel up into the high mountains in the west, the Sami families follow. They build a small village of Sami   huts in the vicinity of their reindeer herds. In the winter the families move back to the coastal area where they have ordinary houses, and the reindeer travel east too. When temperatures drop to -25°C in the high mountains, they have the instinct to go east and spend the long winter foraging in the low-lying forests. Reindeer are at least semi-wild animals and they don’t need people to take care of them.

On my family’s next mountain adventure in Lapland three years later, we got to know one of those Sami villages very well, up the long narrow chain of lakes from Saltoluokta, called Stora Lulevatten. Saltoluokta is, and was even in these long-gone days, a big and wonderful tourist station. John and I got to know it well in 2002 and again in 2003.