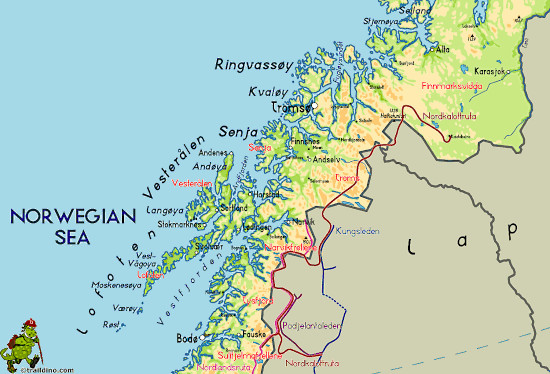 Map of northern Norway and Sweden. Lofoten is the string of ilands below center. Source

In 1947 Mother had one of her great ideas. We were going to spend our summer vacation in Lapland, about as far north as one can get in Sweden. But that was not all. We were planning on taking the train (one traveled by train in those days), all the way to Narvik, the northern Norwegian harbor at the innermost point of the Ofoten fjord. The scenic little town of Svolvaer was our ultimate destination in Lofoten, the myriad of islands that border the fjord to the north and stretch out into the Atlantic Ocean.

In preparation for the trip, we got very useful information about the Abisko Tourist Station, and also about hiking trails in Abisko National Park from the Swedish Tourist Association (Svenska Turist Föreningen – STF). We procured necessary equipment, and we joined STF, which is obligatory for getting access to the many more or less primitive huts where we would spend the nights between our approximately 20 km daily hikes on what is called Kunbgsleden. Our final goal on our pretty long trek was Kebnekajse, the highest mountain in Sweden.

There were four of us, Mother, our stepfather, Arne, my sister Gun and myself.The trip up to northern Lapland and Narvik t was to be a train trip of two nights and one day, with a day’s stopover in Stockholm to see family.

A few days in northern Norway

From Narvik we took a night-time boat to Svolvaer, a town far 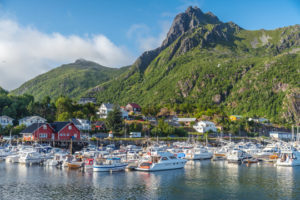 out on one of the many islands that make up the big ‘foot’ of Lofoten. The Ofoten fjord is wide and very different from the various fjords farther down south.

Narvik is the city in Norway that resisted the German occupation the longest. The people in Nordland were fighting a fierce war even long after the southern and central parts of Norway had capitulated. Svolvaer and all of the entire Lofoten is set in a rugged mountainous region and it must have been ideal for guerilla warfare. But Narvik finally had to surrender, in spite of support from the Allies, in this case the British Navy. The German fleet with its submarines turned out to be superior in the Ofotfjord, and of course the final surrender was also due to the German Luftwaffe.

They surrendered on June 8, 1940. In World War II Narvik was of the utmost strategic significance to both sides since it was an ice-free harbor from where important iron ore was shipped from Kiruna in Sweden.1

The train ride from Abisko to Narvik was the most spectacular train ride I have ever experienced in my life. I love trains and I’ve taken many memorable train trips. For some reason we happened to be in the very last car in the train and the back of the car had a superb curved panorama window. I know we were not traveling first class, so this is a complete mystery. We saw the wonderfully scenic lakes and forests going by, steep mountain sides and slopes disappear behind us and the tunnels we were emerging from. We were glued to that window during that last part of the trip, at least Gun and I were, and I will never forget that morning. The beauty of my Scandinavian mountains was breathtaking, and even though I was only 14, I felt the amazement and joy so strongly during that miraculous train ride that I will never forget it.

Well inside Norway we really got into the high mountains and the scenery became even more spectacular. This was in 1947, well after the war, and no passports were required within the Nordic countries. So passing from Sweden into Norway at Riksgränsen was a bit like skiing in Storlien, Jämtland, in the center of Sweden, and suddenly realizing you were probably in Norway — at least you guessed you had crossed the border.

From Narvik we had booked passage on a night boat that was going to take us to Svolvaer, and it was indeed the most memorable boat trip I’ve even taken. We slept very little that night. 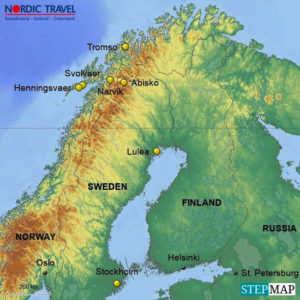 Map of Norway, most of Sweden and Finland. Russia peeks in there too. Source

Whenever we arrived at a small harbor, usually just some docks and small fishing boats against a backdrop of colorful wooden houses and majestic mountains, the whole village seemed to be down to greet us, or at least the younger part of the population. No question of sleeping apparently, even though it was getting very close to midnight. The captain invited the four of us onto his bridge and we had a perfect view of the little towns and all the wonderful scenery we passed by.

We noticed that most of the people who were assembled on the docks were eating something shaped like a magnified lollipop, and we asked the captain what it was. He sent a boy on land to get some for us. We tasted it and… we did not like it. It turned out to be a kind of dried and uncooked cod that is considered a delicacy in that part of the world. The cod had apparently been treated before it was dried on the rocks. I can’t remember what exactly we said to the captain, except great thanks.

I doubt very much if the night-time boat approach to Svolvaer is still in use. People are always so much in a hurry these days and there is certainly a faster way today to make the trip.

But that night trip was to be marked in my memory for ever. I have never seen the midnight sun in such a clear way. The way we saw the sun that night would make any doubter understand perfectly what is going on. The sun, if it sets at all in the middle of the summer, sets in the north – obviously. From the captain’s bridge we saw the sun getting closer and closer to the horizon, which was the line of the water in the fjord. This was after mid-July and so the sun dipped a little bit under the horizon, just below the water line, but only to begin its climb back up before it had disappeared entirely. It was magic. 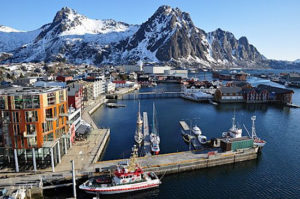 One day in Svolvaer we had a young boy, about 11 or 12, guide us up into the mountains that tower over Svolvaer. It was no serious mountain hiking, just a matter of climbing up to a sufficient altitude to get a good view over the area, the wide fjord and the myriad of Lofoten islands. As we were climbing and chatting with the very lively and smart boy, he laughingly told us how, during the war, the Germans often hired young guides to take them up into the mountains. Once up as high as they could get, the boys would make a quick turn, run down fast and out of sight from the Germans, leaving them to get completely lost in their desperate attempt to find their way back to the town.

The kid was laughing out loud as he told us about the many tricks they played on the never-understanding Germans. The soldiers were always trying to be friendly, just not realizing that they were not wanted by the townspeople, that they were the enemy. (Recommended reading: ‘The Moon Is Down’ by John Steinbeck, which I read at l’Ecole Centrale de Paris with a couple of different classes.)

One day we took a small boat to Trollfjorden, which is a marvel. It’s a narrow fjord and somehow it seemed supernatural, mountains dropping steeply into the water on both sides of the narrow fjord. In later years I’ve seen other Norwegian fjords farther down south and they have possibly seemed as overwhelming, but Trollfjorden was my first encounter with a fjord surrounded by steep mountains and it was narrower than any other I’ve seen later on. It was another magic event. You could almost see the trolls coming out of the rocky mountain sides in the darkness of the narrow fjord. But trolls can be good as well as bad, according to old Scandinavian lore, and the feeling of awe was nothing like fear.

After a few days in Svolvaer we returned to Sweden, traveling from Narvik to Abisko by train. We still had the rock-dried fish in a bag. Maybe we thought we could get used to it and enjoy eating it the way the Norwegians on the docks did. But I think we mainly kept it as a souvenir. However, it stank so horribly that we had to get rid of it somehow, so as not to make the other passengers flee to other cars.

It seems to me now that this dried fish should have been a bit familiar to us. It was dried cod, dried on the rocks and prepared in a very special way. In fact it is quite similar to the dried and cooked cod Swedes prepare for Christmas and which I myself have never liked. All other Swedes seem to love it, however, at least in the south. We call it lutfisk (lye fish), because it has been prepared in soda lye and other chemicals for a couple of weeks, a long and complicated list of different steps of preparation in fact. But I believe most southern  Swedes feel that there can be no Christmas without lutfisk.