This is how it began.  I was looking on l the Internet for information about a  play from Malmö Stadsteater that I was writing about in my memoirs.  I hit on an Ingmar Bergman site where the photos said “foto Magda Molin”. I don’t remember what the play was, but it so happened that the photos were not my mother’s. They were by Alice Stridh who became the theater’s photographer when my mother left to settle in Nyköpinhg where Arne had his new job as a history and Swedish teacher at the lycée. Mother’s career as a top Swedish photographer was over.

However, after contacting the site manager to get the the mistake corrected and receiving lots of thanks, I now realized that Mother’s theater photos may still be available somewhere. I found that each play that had been produced on the two stages at Malmö City Theater had its own site on the Internet. A lot of Mother’s photos, from the big stage and from “Intiman, were up on different sites. it said of course “Foto Magda Molin”. Some photos had her signature, others did not. I got in touch with the theater, which had now become Malmö Opera, and I was told to contact Elzbieta Leiczac who managed the theater archives –- Malmö Opera Arkiv.

My luck was made. Wonderful Elzbieta. For three years we worked together on my collection of the best possible versions of Mother’s photos. Many of the photos I had found on line were badly cut off, top, bottom or sides, and I now got the versions that were uncut. Elzbieta worked hard to get me all the photos she had. She scanned and scanned and gave me the information that was written on the backs of the photos – by Magda Molin and the names of the plays and the actors.

There was still a lot of work left for me to do, since most of the pictures either had specks on them, were faded or needed treatment of some other kind. I made a separate album for each play and I wrote captions that explained more or less what was being expressed in Mother’s very expressive pictures — and obviously also the names of the plays, directors and actors. My spirits soared and I loved working with my new project, for three years. At the same time I also kept working on my memoirs, at a slowed-down tempo.

Mother participated regularly for a few years in the photo competitions in Stockholm organized yearly by the Association of Swedish Photographers (Svenska fotografers förbund — SFF). She had studied photography with Edvard Welinder, a top photographer in Stockholm. I am guessing that she became his assistant, since she had already studied with her uncle in Borås, Jacob Sörner, who had a gold medal from SFF. I know that she learned about the use of light backgrounds from Edvard Welinder and also making generally light photos.I have no idea how long she stayed with Edvard Welinder but it must have been for a pretty long period, since my sister Gun and I discovered in 1946 that she knew Stockholm very well when she guided us around our capital and we got to see most of the high points in a couple of days.For a few years, Mother participated regularly in the photo competitions in Stockholm organized by SFF. Edvard Welinder was now, in the forties, the president of the photographers’ association. It is clear that he recognized Mother’s photos right away, but I seriously doubt if that had any influence on the judgment of the jury.

Mother had won a good number of medals at the conventions in the fall of each year at Hotel Gillet in Stockholm, meetings that ended with a banquet with dance. The fall of 1945, however, was the high point. She had presented three collections (how on earth she managed to do all that work is a mystery to me), one of the three being theater photos. That collection was disqualified because the jury thought it was obvious that Mother had been helped by the directors of the plays, which was definitely not the case. Mother would never accept help from anybody. She didn’t let that get her down though, since she received two silver medals and, also around the same time she got engaged to Arne. 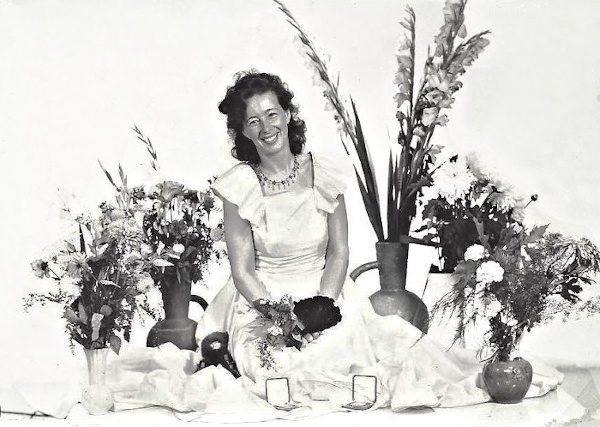 I managed, via a Swedish-American-French friend of mine, dearest Marianne Raynaud, to get the magazine for 1945 from Svenska fotografers förbund. A photo by Mother was the cover photo and as I read the photographer Winqvist’s “review” of the photo I was amazed and very happy. He raved about every aspect of the photo, from the composition to the technical perfection of the photo. Mother called the photo Skolflicka — School Girl. 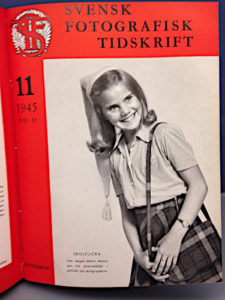 Mother’s prize-winning picture of a young girl at the Children’s theater. — Skolflicka

Mother had always loved theater and she actually began her career as a theater photographer with “Barbteatern” (the Children’s theater) at “Folkets Park” in Malmö. This was the amusement park which had several stages for performers of various kinds. I once saw, when I was a teenager, the famous singer-entertainer Mistinguett there, but she must have been in her 70s at that time since she was born in 1875. “She was at one time the highest-paid female entertainer in the world.[1” There were the usual rides, roller coaster, “Funny house”, the “Mirrors hall”, the Ghost ride, and more.

And there was also this children’s theater of very high quality. Mother knew the man who directed the plays, and she volunteered to become their photographer. A few young actors stood out, a couple of young girls (see photo) and Jan Malmsjö, who went on to become one of the most famous Swedish actors. He was also a singer and a star in several musicals.

There is a funny episode that still amuses me concerning Jan. When my class, in the first year in our flickläroverk (lycée for girls) prepared a class dance (klassfest) in the spring of 1946, I said to Mother and Arne that I couldn’t go because I didn’t know any boys, so there was nobody I could invite as my “kavaljer”. They both knew Jan very well, since he had already had small parts in plays at Stadsteatern , where Arne was a director. They invited Jan for me and he came to pick me up at the right time. He bowed and said he had come to pick up Siv. He was 14 and I was 13. But I was just a child at that age, and also I was a year younger than all my classmates.

I was wearing my first nylons, I remember but, I really looked like a child, whereas most of my classmates were young girls. Everybody, or almost everybody danced except me – well, and a few others. I have later learned that Jan had a crush on the prettiest girl in my class, Karin Bergman, at the time, but he, the future star singer and dancer, didn’t’ even dance with anyone but spent the entire evening eating cake (tårta) and talking to other boys who were not dancing.

Jan Malmsjö who started his career at the Children’s theater — here at the age of 13. Photo called “Grabben”, the guy or some such translatuion.

My next “encounter” with Jan Malmsjö was on television in the fall of 1961. I was newly divorced and doing my student teaching in Stockholm at Statens Normalskola and I shared an apartment on Östermalm with a young girl, Brita Wolffram who had spent two years in the U.S. working for IBM. She suggested that we rent a TV. Sure. No problem. The first evening we had our rented TV, we watched an unforgettable show with Jan Malmsjö and Lena Horne, a singing and dancing program.

Jan was hailed as the new Gösta Ekman, but probably very few people today even know of Gösta Ekman as a name. Lena Horne however, is still pretty well known, I believe, even though she was a lot older than Jan, almost a different generation.. And so is, of course, Jan Malmsjö to a Swede.

I have just two more of Mother’s competition photos. One of them is another photo the jury raved about. It was a photo of my sister at 14. Her photo was in the same SFF magazine as the School Girl. The other one is of me blowing soap bubbles. I had spent some time with Tante Gerda, Arne’s mother, in Mölle in the summer of 1945, and I seem to remember that Tante Gerda had bought me the sun hat. 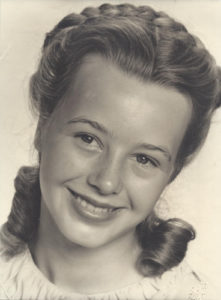 Mother laughed at the way the jury raved about the photo of Gun; She said there was nothing extraordinary about it. It was a picture of a pretty girl. I have a vague memory that this photo was in her “Serie” collection, serie meaning in this case, Polyfoto, where several different photos are taken on one cassette. The photo of me is in the Porträtt collection — these being taken with Mother’s own and very modern one-picture cassette camera.  I remember clearly that it was taken in Mother’s own atelier. I have always had very sensitive eyes and got very bothered by Mother’s sharp big lamp, so it was a relief to me that Mother decided to take a profile photo of me. There were two big and sharp lamps in her atelier, which had followed her from Gustav Adolfs Torg. To Mother good lighting from the right angles was the first and essential condition of good photography.

At the end of 1945 Mother had three silver medals in all and a number of bronze medals. If she had won another silver medal that would have made one gold. I believe that the reason why she did not go on participating in the SFF contests was the overload of work she had taken on being the theater photographer as well as taking care of her own business. 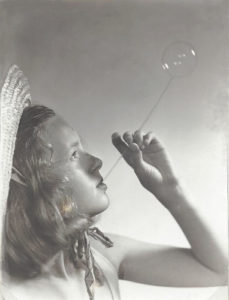 Siv blowing soap bubbles — summer .1945. Not quite sure this photo ever got to Stockholm.

I can well understand that Mother could not find the time to prepare collections for the SFF yearly contests after she had taken on the considerable task as the new theater’s photographer as well.

She also managed the Polyfoto business and had given courses to Polyfoto photographers from all over Sweden, but that was in the past now and she had gotten the Malmö Polyfoto business on the right track with greatly improved quality of photos. She had also changed the system from the dull 48 photos per cassette, which they had worked with when she took over, to 12 or 24 pictures. Obviously the one sheet with the numerous photos served as base for the enlargements the customer might wish to get. 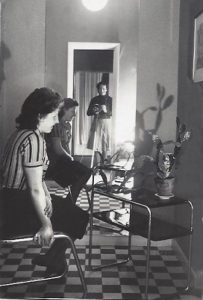 There were three young women photographers who worked in the two Polyfoto ateliers and who also worked in the upstairs region on the retouching. In the basement there was a man who did the copying and developing in the darkroom, which I loved to watch, and a woman, fru Göransson, who did the mounting work in the large space outside the darkroom. There was of course also one woman who minded the store.

In the back of the ground floor was Mother’s own atelier containing her own waiting room and a small dressing room; all of it with her own equipment from her first atelier on Gustav Adolf’s Torg.

Here is a fun picture from Mother’s first atelier. Her assistant, Hildur, is sitting in front of the mirror in the entrance to the waiting room. Mother is seen in the mirror.

I had one of the best three years of my life working with Elzbieta on Mother’s wonderful theater photos, collecting and treating 660 of those photos. .