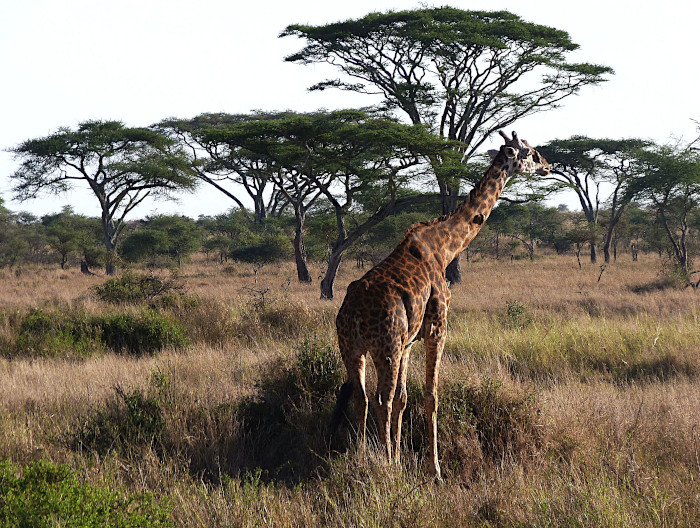 A proud giraffe and the savanna, on a background of acacias

In 2012 John had a wonderful and exotic idea. We had already been to India in February of that year, but we usually made two trips in a year in those days. So we decided to go on a photo safari in Tanzania.

We arrived in Arusha in the very north of Tanzania  and spent our first day in early October in the city, visiting a huge market and having a wonderful meal in a very African restaurant. I had a charcoal grilled fish that was deliciously fresh and tasty.

On October 5 we started our safari in Tarangire National Park. From there we were going on to Manyara Lake National Park and then Serengeti dating back millions of years, and especially the Ngorongoro crater with its amazing wildlife.

Our highly skilled guide and driver, Emmanuel, Manny that is, was amazing when it came to sighting animals that seemed to us to be completely hidden a kilometer away. And he knew even the names of birds, which interested John more than they did me, even though I of course admired their colorful plumage or other kind of decoration.

For the safari the tourist agencies provided very special Toyota jeeps with a roof that lifts up at the press of a button. That way you can watch and take pictures from inside the jeep very comfortably. You are not even permitted to set your feet on the ground except in the picnic places that are provided in convenient picnic places for breakfast and lunch.

We got up very early and only had breakfast when we had been out for a while and reached the most convenient picnic area. They usually offer you company varying from colorful little birds to oodles of mice (they did make me shrink though), to monkeys — all anxious to pick up crumbs from our meals.

On the very first day we saw a beautiful herd of impalas at a waterhole, one male only who is at the very left end of the picture (gallery). A lot of wildebeests — our first sight of both these animals — joined them after a while and they mixed in the most friendly way, the way both these species always do.  Wildebeests and zebras together, and in great numbers, was a common sight. 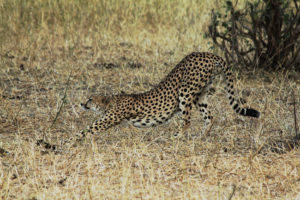 Our mother cheetah stretching out before settling on a little hill to look for booty.

The second event that stood out on this first day was a mother cheetah and her cub that Manny sighted with his usual sharp eyes. We spent forever watching them  She stretched out in all her impressive length and then she  moved with her cub a few meters away to a small hill.

At the speed of lightning she then suddenly took of from this hillock, so fast that we barely saw her disappearing, leaving her cub to wait for the booty she was going to bring back. These wild females are wonderful mothers, and you get the impression that they basically hunt to feed their cubs. Which is not quite the case of course. Cheetahs are the fastest mammals in the world and it was just amazing to see how she disappeared without a trace, or so it seemed, as soon as she had caught sight of the booty.

One more very memorable event was the next day when we saw a seemingly endless stream of buffaloes trekking along a small river. To get where?, we wondered.

We had never expected to see such a mass of buffaloes in an immense more or less double line moving towards some unknown goal . We were thrilled.

We left our lodge in Tarangire early the next morning and set out for Lake Manyara National Park. We went out the same way we had come in and one of the first sights were three giraffes, possibly in a close vicinity to the giraffes from the day before. Also a male waterbuck looked irresistible in his graceful stance.

Further on our way out of Tarangire we met with a mother lioness and her two cubs that we fell in love with. They were eagerly chewing on a long bone, which could have been the leftovers of an antelope, for instance. But we tried not to think of what the animal was in this case. You must accept the law of the jungle without queasiness out here in the wild. They, at least, just kill to eat.

We then made our first encounter with wildebeests close by, as they were running across the road and mingling with zebras around a huge acacia. We were often going to see those two species together.

Manny had asked us as we got going from Tarangire in the morning if we would like to see a giant market that was taking place not far from our lodge in Manyara national park. Of course it sounded interesting, and it was.  Everything was sold at that huge market, from cattle to rubber sandals made from worn-out tires, to food and drinks, to colorful fabrics with very African looking patterns. There was even at least one treadle sewing machine going very fast for those who wanted to get some clothing done while waiting.

On our way to the market we got our first view of the Rift — the low area with Lake Manyara that had developed after the tectonic shift millions of years ago. A piece of east Africa started breaking loose from the rest of the continent. The mountains on the east side have been eroded, but you can see what is left of the mountains on the west side of the rift. We could see Lake Manyara and what is left of the mountains in the west.

We got into the forest of Lake Manyara National Park and the first surprise was a hoard of baboons all over the path we were driving on and also up in the trees. One mother baboon and her two babies were so funny. Ma was first going over the fur of one of her babies, for fleas of course, and then right away the smallest one was out on the road and it looked to me as if he was stretching up both arms in joy or surprise. On closer look though, it was obvious that he did not have three arms and that what was up in the air was his tail. But I just cracked up laughing at the first sight of that picture a few days ago.

The second big event in that forest is still with me as a memory of a fleeting glimpse of sheer life and beauty. Two bushbucks, light-colored spots on their sides, were crossing the path and getting into the leafy forest on our right. These are antelopes just about as graceful as we ever saw. I believe this was the only time we saw those antelopes. Clearly a bushbuck lives in the bush, but for the rest of our tour it was savanna. I took a couple of my favorite pictures ever from our tour through the national parks of Tanzania. One is here below. 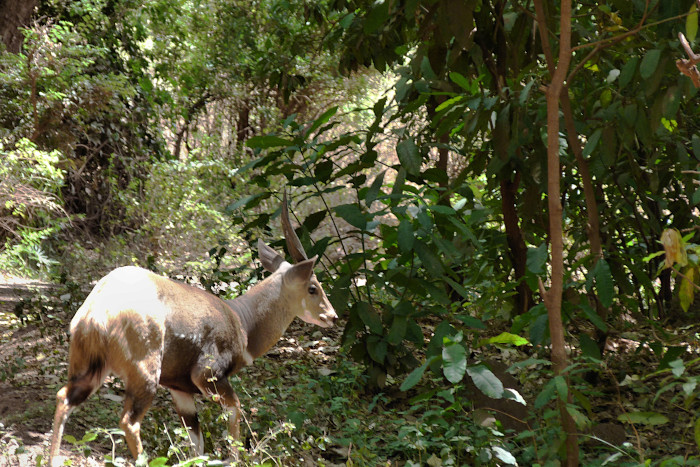 A bushbuck in the forest in Lake Mayara National Park. Probably my favorite picture from Tanzania. 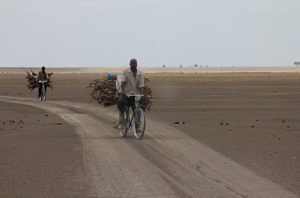 We met two bikers on the dried-out lake who were transporting a pile of branches each. For making fire, we assumed.

On the last piece of  the way to our lodge we drove across a dried-out section of Lake Manyara that seemed to go on forever. It felt  like driving on a plowed and dried out field. We were tired and we just wanted to get to the lodge and to a shower.

We met two bikers whom I did not envy. They were pedaling across this bumpy dried-out lake, their bicycles loaded with what just looked like a mass of smallish branches. Firewood? But how strange that it had to be transported in this way.

We spent the next day driving around Lake Manyara National Park and got to see some wonders in the forest that, as far as this tour was concerned, were unique to this national park.

Above all, the gorgeous little bushbucks were a sight I will never forget. There was a beautiful leopard stretching out languidly after jumping down from the tree where we had first sighted him. He then ran off to other adventures. And of course there were the hilarious baboons, also in the forest — a first as far as baboons go. 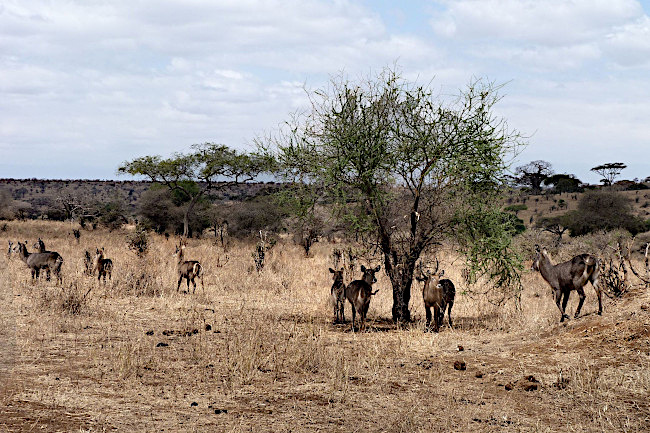 A herd of waterbucks spread out over the savanna.

On the savanna there were the herd of wonderfully graceful waterbucks, which we saw a herd of here on the savanna. Waterbucks are one of the long list of antelopes that we got to know on our safari.  Also the lioness with the two cubs we watched for the longest time. It was quite fascinating to see how they divided up the booty, the mother and the cubs.

The following day we went on our way to Serengeti National Park.