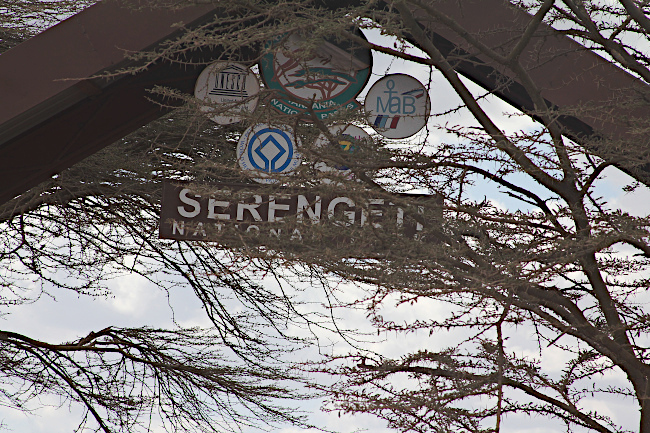 The entrance to Serengeti. Here we are.

We set out from Lake Manyara National Park after two days, leaving the Rift behind us and heading for the Serengeti National Park, passing on the way by the 2-3-million-year-old Ngorongoro crater.

We traveled along Masai villages with busy trade going on in the street. There was just one main street. 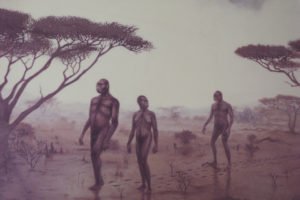 I consider it dubious that prehistoric man might have looked this similar to modern man, but then I don’t think any precise era is specified.

The big event of that day was Olduvai Gorge, a famous archeological site where there is now a museum. Fossils found here were those of the ancestors of the humans that later spread into the rest of the world. Going through the museum was absolutely fascinating, not to say mind-boggling.

That anthropologists have been able to construct, based on fossils found here, prehistoric humans and conclude that this is the site that humankind originated from — this is almost beyond belief. Homo sapiens left this place about 50 – 60,000 years ago, but homo erectus dates from further back. This was indeed one of the high points of or visit to Tanzania. 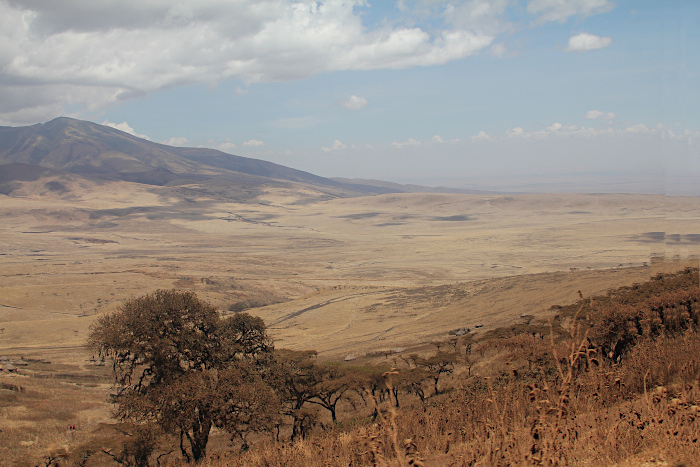 Before we drove under the sign to Serengeti National Park, Manny took a picture of John and me with the Ngorongoro crater behind us. We ourselves took several pictures of the astounding views in the crater where we were to spend two wonderful mornings a few days later.

I believe it was in Serengeti that we got to fully appreciate Manny’s eerie ability to sight animals at a great distance. He was a wonderful man and an expert guide.

After passing under the Serengeti sign, four beautiful lions were our welcome committee. They were lying half hidden in the high grass and we were delighted to be greeted like that.

Other unforgettable events on the two days in southern Serengeti were a leopard sleeping very comfortably in a tree, legs hanging out over the sides of the branch he was sleeping on. Hilarious. We were to see more of that spectacle.

I got le coup de foudre for the several topis we saw here, and we were to see many more of those in northern Serengeti. I took one of my favorite pictures of three topis in the forest. They were lined up as if posing for the camera.

The topis, the hartebeests and the waterbucks are stately antelopes that are one or even two sizes larger than the gazelles and the impalas.  They are magnificent beasts all of them even if my preference is for the topis Then there are the hopping wildebeest with a mane almost like a horse, who are irresistibly funny. I made a movie of the wildebeests hopping and I am attaching it here. For the hartebeests and the topis it was le grand amour, but the wildebeasts are so funny 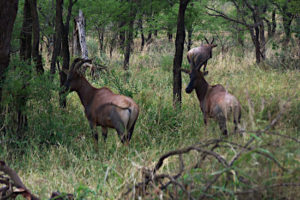 Three topis lined yp to perfection. One of my favorite picrures.

We first arrived at the Serengeti lodge after a long and dusty day and just after we arrived at the lodge, the bottom fell out of the sky. Good. We were indoors now. There was going to be one more dreary rain later on in northern Serengeti that we did not need, but it did no harm to our good mood.  This was adventure.

We spent two days in southern Serengeti, and what animals did we not see!  We even saw some ostriches, and more were to come in the Ngorongoro crater.

At the end of the second day in southern Serengeti we drove through a jungle-like forest, going up and up. In the picture on the right It is probably the savanna that can be seen vaguely in the background, and I even think there is a piece of the Rift with Lake Manyara on the left. Very hard to see though.

We finally arrived at the highest point of the mountains surrounding the Ngorongoto crater where the beautiful  Lobo lodge in northern Serengeti was welcoming us.

We were to spend two nights in this very modern and beautiful lodge.  It was paradise. The lodge was built in among enormous rocks and gorgeous umbrella acacias (Acacia tortilis ). Nearby there was savanna and several more kopjes, huge rock formations.

On the second day, it started to rain soon after we had seen our giant crocodile, and I never believed a crocodile could be that enormous. I am better acquainted with Florida alligators, and I had never imagined a huge monster like this. We had already seen a couple of crocodiles at a distance, but this one was right there, swimming towards us.

It was raining when we sighted a pride of 16 lions (according to John’s count, and they all show up in a pan he made). As it was we saw them as through a veil. Anyway, in spite of the rain, the pride of lions were there, and we did see them, one impressive male and several young ones. Even through the steady rain we could see 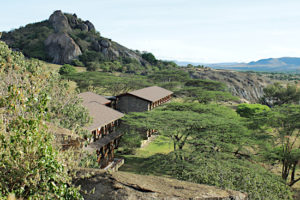 Lobo Lodge surrounded by “umbrella” acacias and enormous rocks. A huge kopje in the background.

them walking lazily around and the male sitting perfectly still, like some of the females. The leader of a pride of lions is a female, and there was only one male visible.

The rain continued as we went on and we met on a big group of elephants bathing in a river, about ten or so with the young ones, They were so funny, and I took a short movie. it is a bit slow though, because elephants are pretty slow-moving animals. Here is the video.

Altogether, we had four wonderful days in Serengeti, days of unforgettable wildlife and gorgeous nature.

After the two days at Lobo Lodge we went on to one of the wonders of the world, the Ngorongoro Crater. Our hotel was right on the southern rim of the crater and it was only one of several hotels, the others being on the northern side.

We spent two wonderful mornings, from early morning till noon when tourists had to get out of Ngorongoro crater.

Ostriches were maybe the most spectacular animals from our two mornings in the crater, because of their hilarious mating behavior. The female did her mating dance, then the male did his peculiar dance and the mating seemed to clearly be what was going to follow. But no such thing. Manny called the female Helen, and John suggested Herman for the male.  Now, after their mating dance, Herman walked all the way up to Helen and when he got right next to her … he walked right past her. It was surprising and hilarious.

The other very funny event was the hopping wildebeests. I made a movie for those who might like to see them in motion. (Here is the short video from the Ngorongoro crater.)

Wildebeests are almost as big as small horses, but, amazingly enough,, they are antelopes, They are, by the way, also called gnu.

The animals mentioned so far were just the most striking ones. I want to add though a regal male waterbuck in the woods and some impalas lined up beautifully for a photo in the gorgeous scenery of the crater.

And that is not all. The mating lions on our first morning were another saga that was late forgotten. The male had a bad wound in the side and we gathered that he must have been in a fight for his dame.

The unworldly beauty of Ngorongoro crater can not be described. It has to be seen, and that’s clearly why there are quite a few hotels on the rim of the crater. The worn-down mountains surrounding the crater, sometimes white, look surreal in their soft lines and eerie color. 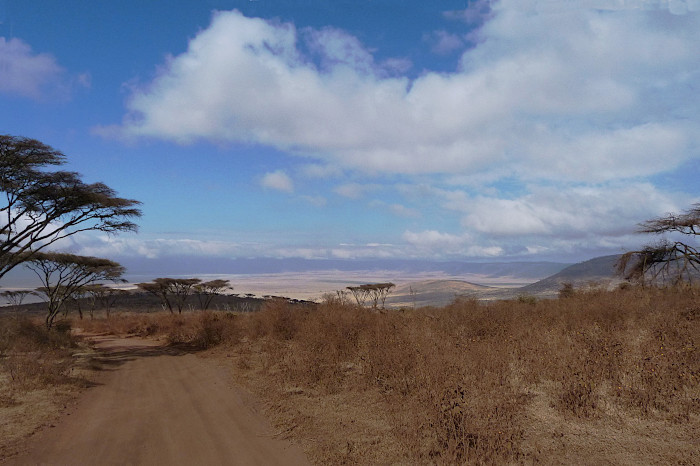 Goodbye Ngorongoro. We could never have imagined the beauty of this million-year-old crater and its wonderful animals.

What made my day — and more

Back in Arusha, we went on a short tour with a guide to nearby Ngiresi village with a secondary school. We walked around the very neat village with cows and goats and banana plantations. I believe we were told that it was a self-supporting village, and it did look quite prosperous with lots of cultivated land.

We then went to visit a secondary school that the guide thought might be of interest to us. And indeed it was. We spent a long time talking to the principal and the vice-principal, who was also the English teacherl– while the class was patiently waiting in the classroom.

We discussed politics and teaching and I mentioned that I had taught English in India. In fact I taught English to the members of the DEVA staff two years in a row for more or less a full day both years. And like here we were talking uninhibitedly before going into the classroom in the DEVA building too. People have clearly learned to wait very patiently in these developing countries.  We know for instance that the man who usually came to the Varanasi airport to pick us up often had to wait for a couple of hours. He thought nothing of it. I can’t remember his name, but he was one of the students in my English class, both years.

We had asked Manny about the government of Tanzania and he was very positive. We understood now that, working for a tourist agency, he would mention only the good sides. Now we got more like the true picture of ever existing social problems.

When the vice-principal of the village school, who was also the English teacher, heard that I was an English teacher, he asked me if I would do a simple demonstration of my teaching method. Totally unprepared though I was, of course i said “Sure”.

I walked into the huge class, which seemed to hold about 50 students, but maybe there were not quite that many. They seemed to be about 12 to 13 years of age. I walked down into the class and addressed a student au hazard. They were all extremely well behaved. No question of  discipline problems here.

I was thinking that they might well know the name of a country like France, so I said “I live in France.– Where do I live?” using my regular question/answer method. The student repeated “I live in France” — ” Oh no no”, I said “you don’t live in France.” Always using gestures, I pointed to myself and said “I live in France. You live in Tanzania — Where do you live?” And i finally got the student to answer “I live in Tanzania.” Wonderful. The ice was broken. They got the idea of answering a question instead of just repeating some words. I went on to a second student asking another easy question, about speaking English I think.  “Do I speak English?” — “Yes, you speak English. ”  Yes, the ice was broken.

It was a very short demonstration, but I was very pleased that it worked. As we got outside; the teacher shook hands with me and thanked me. He said I had taught him a lot by demonstrating my method. What a wonderful memory this is. I will never forget how sincere the teacher looked when he thanked me.

A village close to Arusha