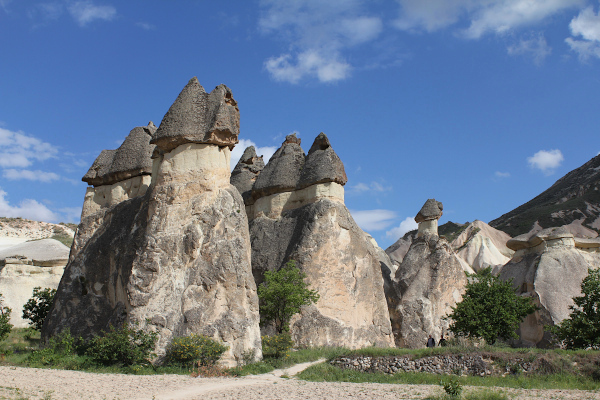 John and I have traveled in the most varied countries, some in the third world, beginning in 2006 with India. Before 2006 we kept to Europe or an occasional visit to Florida to see Bert, John’s dad.

We have been to several Muslim countries, not even counting India, which has a Muslim population of over 200 million. Also, India seems to be the country where you most often see the totally hidden faces among the women. 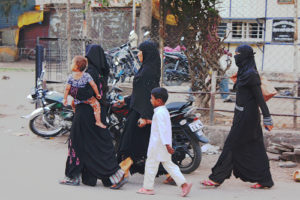 Muslim women, at least one in complete burka, seen in Aurangabad in 2012

Many of Muslim Indian women wear burka where only the eyes are showing. John once at our hotel in Mumbai saw a burka dressed woman with her eyes barely showing and next to her was her husband dressed in shorts, flipflops and an open shirt. What scandalous hypocrisy. In spite of this prehistoric way of obeying the Koran, some Hindus convert to Islam to get rid of the stifling caste yoke.

It must be added here, though, that the educated classes of the Muslim religion wear perfectly modern dress, such as our friends in Bangalore, Amina and her family. Amina is an expert on natural medicines, and she, her husband and son whom we met one memorable evening in Bangalore were pretty much like any western young family, traveling around on a big scooter, the three of them. We came from Mumbai and were on our way to wonderful Hampi and Badami in the state of Karnataka.

The predominantly Muslim countries we have been to were Egypt in 2007, where we of course saw all the amazing standard things, temples, and 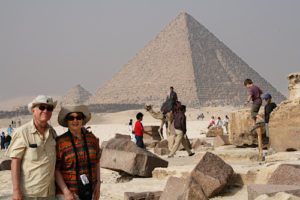 A sbapshot of the tourists in front of the pyramid of Menkaure in Giza. A very hazy day.

pyramids, the most impressive Sphinx, very worn on the sides, and the enormous relief statues at the temple of Abu Simbel in the south.  We went to the valley of the Kings one very early morning when the guide told us later on that it had been 45° in the shade that afternoon.

We also visited with our guide the perfectly enormous “Mosque of Muhammad Ali” in Cairo, where we had to take off and carry our shoes and set them down upside down on the floor. In India you always leave your sandals outside the door of the temple, but this mosque was far too big for such a procedure. The size of this mosque was perfectly stunning. The grand mosque was built in the early 19th century. 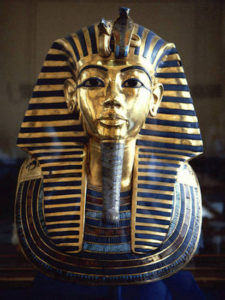 Tutankhamonn’s mask from Wikipedia, since we were not allowed to take pictures.

Cairo Museum is another landmark in Cairo. It was a rare treat and, lo and behold, Tutankhamun  (1342 – c. 1325 BC)  was at home. I also loved to see Nefertiti, who was the very entity of earthly beauty for my one-year history teacher, who was also my wonderful English teacher. We were not allowed to take pictures in the museum, but what was important was of course to actually see all these beautiful and historic treasures.

After Cairo on this tour, the only tour John and I have ever been on, we lived on a very comfortable boat that traveled up the Nile past locks and along gorgeous river banks. Everybody was French, our friends Jean-Jacques and Christiane and all the others, about a dozen or so.  We went by boat to Luxor and one day we took a flight to Abu Simbel, back and forth, up very early as I remember. But the gigantic statues at the temple of Abu Simbel were well worth it.

Morocco in 2010 with a fabulous few days in a desert tent village (for tourists), complete with a camel ride to observe the setting sun.

Gorgeous Morocco was also a very pleasant discovery, a kind of country we had never been to at the time, its scenery and its way of life, old fortified 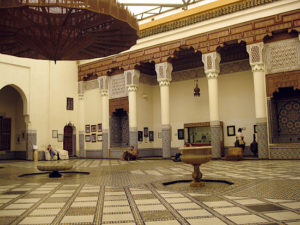 towns  (ksar) huge caravanserais where, in the distant past, the people who came with the camel caravans through the desert put up as they reached their goal — or on the way to their goal. Arabs invaded northwest Africa when Carthage (now Tunis) was once the center of civilization and trade in this region. What is now called Maghreb  in Arabic and French means “west”. The Arab immigration came from the east of course, bringing Islam and many other features of civilization with them. The migration of Arab tribes to North Africa in the 11th century changed the character of this region forever. They of course brought with them their language and their religion, which are still there today. 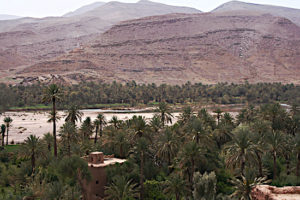 There were the “oueds“, wide and halfway dried out riverbeds, that our driver drove through fearlessly in our four-wheel-drive jeep? We saw fantastic Moorish architecture, enormous “palmeraies” and  mountains — multicolored and in  all kinds of various shapes. Agdz — Ksar (fortified village) of Tamnougalt

We crossed the Atlas mountains, a memorable event, on our way from Marrakesh to Fez. A stunning country and a country of beauty and history.

We had seen desert in Egypt by the pyramids, for instance, but this was not just any little piece of desert.t. This was on the edge of the Sahara.

We have visited Turkey twice, and it is of course by no means a third-world country – in spite of the retarded policies of President Erdogan, who seems to imagine he might somehow make himself the head of a new Ottoman Empire .

Our first visit to Turkey with our friends, Jean and Danièle, Jean-Jacques and Christiane, was in 2011, and it was a complete success.

We took a boat trip up north  through the Bosporus, almost to the Black Sea and it was amazing to see all the palatial houses on both sides of the sound, possibly mostly on the Asian side. That is when I got to know Nihal, a delightful woman whom I have never forgotten. She was traveling with three somewhat elderly family members, and her English was perfect.

We all had lunch at the same restaurant, she with her group and the six of us at the table next to theirs — our group of six more or less French. I remember that Jean looked a bit hirsute since he had not shaved for a couple of weeks. He did finally get a shave and a haircut by a barber in Istanbul.

After Istanbul we went on to the town of Selçuk, a charming town on, the west coast of Asia Minor, which was once the center of an empire. From there we made excursions south, north and west to the Adriatic Sea and, among other things, we saw several beautiful archaeological sites.

There was the overwhelming site of Ephesus, on the west coast of Asia Minor.  This world famous and enormous archeological site  can only possibly be surpassed in beauty by Archaia Messini (Ancient Messene) in Greece, central Peloponnese, which we have visited twice in recent years. However, in size, Ephesus takes the prize.

What now stands out in my mind about this pleasant town of Selçuk is its huge number of storks who had made their nests on the tops of ancient columns.

John and I enjoyed Turkey so much that we went back in 2012. We first went back to Istanbul, picking up on a few sites that we had missed on our first visit, or that we wanted to see again.

We were very sorry to miss out on meeting up again with my new friend Nihal from the previous year, but it so happened that she was in Geneva at the same time to see her son who was a student there. We had actually been invited, in an email, to a wine tasting dinner with Nihal and her husband whom we never met. It was, however, not so much the wine tasting that we missed, but rather seeing wonderful Nihal again.

Our second main goal this time was Cappadocia (Kapadokia in Turkish). However, in Istanbul we had a very memorable adventure in the Grand Bazaar, which concerns suede and leather jackets. No details here. It was all far too maddening and embarrassing.

We have visited Muslim countries, numerous Hindu states in India and Tanzania, an African Christian country and a former British colony. The missionaries must have done a good job there, since the people seem to be thoroughly Christian.

But Tanzania and the fantastic fauna will be the subject of another chapter.

The one thing that stands out from our two visits to Athens is obviously the Acropolis. Not only is it a marvel, but 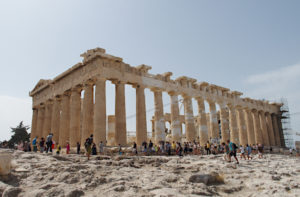 Siv finally also made it up on the Acroplis. We did it the wrong way in 2015; all in the sun. But Wow_

The lines to the museum in 2015 were far too long, and we were  very happy to get there the second time, after only half an hour’s waiting in line. Indescribable beauty. Impossible to give any kind of justice in words to the fabulous reliefs and freezes, the swirling robes and the supple bodies.. 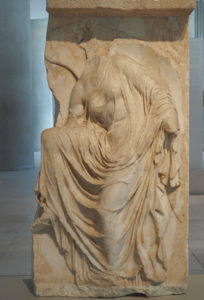 One of the most graceful reliefs in teh Acropolis Museum

After 2015, when we went on to three of the small islands, we then spent a summer vacation in Crete, followed by two summers in Peloponnese.

The summer vacation on the year  2016 we spent in Crete only. W first of all  visited Knossos from Heraklion, of course, and we loved it and its gorgeous setting in among the trees. But I do think that the archeological site that stands out the most for us was Phaistos, a much smaller site, surrounded by enormous olive groves. It is close to the south coast and the bottled-water-making town of Zoros. We must have been drinking Zoros water from the tap at our hotel. It was the best. 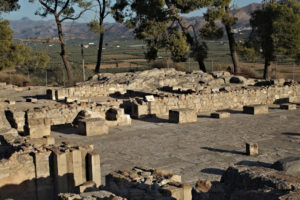 The slanting evening sun on old stones at Pkaistos — and endless olive groves.

A friend of ours sent us a postcard one year from Peloponnese, and that gave us the idea of moving on from Athens and the islands. We had by then fallen in love with the country and the people, the beauty and the friendliness. John would add — and the good food.

We must be real lovers of archeological sites, for the next year and the year after that we discovered the fabulous Archaea messini (Ancient Messene)). It is very simply the most beautiful in the world — quote from the lady who sold the tickets at the attaining museum, an archeologist herself most certainly. These are some of the ruins of the large classical city-state of Messene.It dates from the 4th century BC.

These are but a few of the travels we have done in this century, but maybe the most exotic ones. Tanzania still remains though to get its own chapter. It was a totally different kind of vacation and it did leave an unforgettable mark on our minds. But Greece is a fairyland and I can not forgive the IMF and the World Bank for leaving it in such dire straits.

We were there in the summer of the Greek Bailout Referendum when the OXI (No) won big time. OXI was scrawled in graffiti all over walls and streets, and I guess someone told us it was pronounced ‘Ochi’. Right after that, Alexis Tsipras betrayed Greece and his own Syriza party. The former minister of finance, Yanis Varoufakis, explained to us later what had happened. He has gone on to explain a lot of basic economics (and not so basiv) in writing and in speaking. Varoufakis resigned from his post after Tsipras’ betrayal.

However, no matter how much they try to destroy Greece, it will always be there, with its islands and its blue-blue water.  And its gorgeous old ruins.