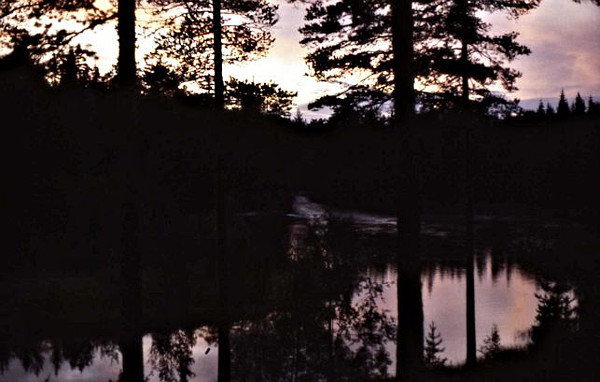 Twilight over the lake next to Nina’s little house

One day in 1984 when we still lived in Paris, we had dinner in a restaurant with a friend, Nina, who had a big farm house in Löa. Lennart, a friend from my early youth, was then married to Nina’s sister Maria. We spent a very nice evening with Lennart’s sister-in-law. whom we had just known vaguely until then. She generously invited us to come to Löa, with friends if we liked, in the upcoming summer. She had a separate little house for us. 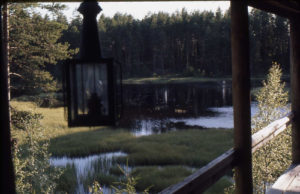 View over the pond, Glatjärn, from Inger’s veranda, a dream house out in the woods.

I had three friends in Löa who were movie makers. One of them was Inger Åby, the younger sister of my friend from school years, Ragnhid. Inger made dramatic movies for Swedish television and became so highly acclaimed that she was sometimes hailed as a new Ingmar Bergman. That may have been a bit exaggerated, but her movies were definitely works of art. Inger, retired now, had a distinct flair for beauty and drama,  the Swedish past and the perfect music to accompany her movies.

Inger’s masterpiece was no doubt Stravinsky’s The Rake’s Progress, which she made as a movie that got the Prix Italia in 1995. As a pure coincidence it had its world pre-premiere in Lyon after we had moved there, in a small salle in the Opera building.

1966. A crayfish party on their verandah overlooking gorgeous lake Glatjärn. This picture was taken by Lars Åby who is sitting close to the camera, Inger at the other end of the table.

So we were invited with the press, the celebrities and the main actors and singers. Inger introduced us to Barbara Hendricks, one of our favorite sopranos. We shook hands while seeing Barbara look above our heads at the press. She seems like a wonderful woman and we did not hold it against her.

Two other friends, Lars Åby and wife Nina Hedenius (who kept her maiden name),  separately made nature documentaries, Lars from the Arctic, polar bears, Svalbard (part of which is Spitsbergen), and Greenland, to name a few of his subjects.

Nina made ecological documentaries about the once clear water in Swedish rivers and streams now being heavily polluted in various ways, or about old people being abandoned in their loneliness — excellent socially oriented movies.

Nina is originally from Stockholm. Lars grew up in Löa, or close to it, and he has actually been called the man who put Löa on the map. He has made documentaries for BBC and also contributed to National Geographic Magazine. His photography from the Arctic area and its animals is possibly unequaled. 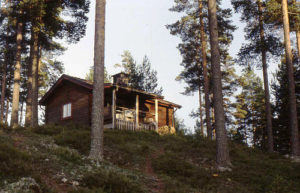 Nina’s and Lars’ little ‘cottage’, which she generously invited us to use in the summer of 1984.

The spouses had changed over the years — musical spouses, as John says — but the people were essentially the same. Inger had first been married to Lars Åby, and Nina was his  second wife.

With her invitation Nina sowed a seed in our minds, and the outcome was a minor invasion in the summer by us and our French friends. However, it was very likely what Nina had expected when she invited us.

We arrived in Löa with our friends, Jean and Danièle Porta with son Olivier and a buddy François, the son of another couple of very good friends of ours. We had been invited by Nina to stay in a separate little house she and Lars owned. We did not see Lars this time since he was in Svalbard, supposedly making a movie.

Our welcome evening turned out to be a fabulous event. Dinner at Lennart’s and Maria’s house and two of Lennart’s children were there, Nina lent us her “honeymoon” house on the little river, and there was even a tiny tent-shaped house where Jean and Danièle slept. In the house there were two rooms and a kitchen.

As the story goes, Lars one time a few years later came back from Svalbard accompanied by two young Eskimo ladies who were seemingly interested in getting to know a piece of Sweden. I don’t think Nina was very appreciative of Lars’ generosity, and that may very likely have been the the spark that set off the fuse for a divorce. I know Lars fairly well, and I would not put this story beyond him. What I do know for certain is that Lars from then on lived in his own farm house right across the road from Nina’s house. Lars died in 2009.

The house where Nina offered us to stay turned out to be hers and Lars’ “honeymoon cottage”, gorgeously situated on the little river that flows by this ‘cottage’ (to use Lennart’s favorite word) to end up in Glatjärn, a small lake  in front of our friend Inger’s fairy-tale house. 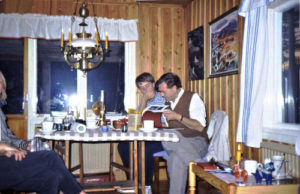 The cozy living room (with two beds). Our hostess, Nina showing slightly on the left. Lennart and young Frabçois on the right.

We were invited to Nina’s house a couple of times for sumptuous dinners (moose, I think, once) and, for all their generosity, we invited our friends to the one good restaurant in the neighborhood, Värdshuset Älgen (= the Moose Inn). We had an excellent dinner at the inn and it was another very pleasant evening.

Before setting out on our way back to Löa, Nina warned us about police controls for drunken drivers, for as things go in Sweden, you must not even have had a glass of wine if you get caught for an alcohol test. She said we must take la route du cognac which was never checked, a little back-road that few people ever traveled on. Nina speaks French and after the restaurant I thought she and Jean would never stop chatting and let John and me go to bed . Our beds were in the living room. The boys slept in bunk-beds in the second room.

In Nina’s  beautiful farm house we watched some of her own and Lars’ television movies, nature and ecological movies, the environmental movies by Nina herself and some movies of polar bears and the Arctic by husband Lars.

After this superb visit to what I fins to be just about the most beautiful region in Sweden, which is saying a lot, we parted from les Porta.

They went back to France. John and I made our way to Falsterbo, in the southwest corner of Skåne, where we spent a couple of pleasant days with Gun, Per and family. We then went on through Germany to Brand. It was to be our fifth summer in Brand. What a summer! And what energy!