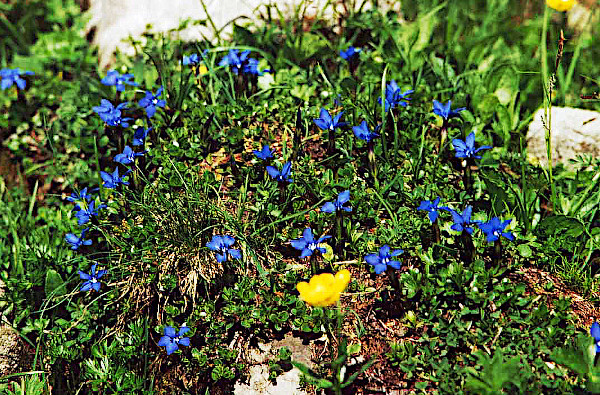 The ubiquitous Kleinenzian that we see in many variations — and one buttercup.

We remember several more or less minor walks mainly because of a gorgeous flower we associate with it. The first time ever that we saw a Türkenbund (Lilium martagon, the ‘martagon lily’[ or T’urk’s cap lily’), the most beautiful one we ever saw during the years in Brand, was on our way down from the company of a mass of friendly sheep at Obere Sonnenlagant Alp in 1984., There is no Hütte there, just a shed, for the shepherd I suppose, even though he obviously doesn’t spend much time up there. We went there at least on two occasions, but this was our first walk to this “Alpe“, (säter in Swedish) — a quite long and strenuous walk in fact.

Up at the little hut we would eat our sandwiches and share them with a friendly sheep or two.

When we walked up  to Saarbrückener Hütte in 1981, we were staying in Silbertal in the Montafon Valley for a short period. We made that walk once again with Fritz and Renate in 1992. They did not seem taken in by the walk but the biggest show had sadly completely changed over the decade that had gone by. In 1981 there was a huge glacier on the mountains across the valley in front of the Hütte. This glacier could well compare with the two we saw on our way from Leirvassbu to Spiterstulen in Norway in 1982. That was the day before we did not go up on Galdhöpiggen, because of a snow storm. This was now 1992 with the Langes, and the melting of snow and glaciers all over the planet had been taking place.

One more little thing gave me a huge thrill. For the first time in the Alps I found a ranunculus glacialis. I knew it well, since it is one of the most gorgeous flowers I have ever seen. I did actually find it a few more times during these twenty years, even once, most surprisingly, on the path around Lünersee. But the ones at the base of the last climb up to Saarbröckenerhütte was the prettiest I have ever seen. I also found some high up on the path to Totalp, and even in one more place, I forget where. Obviously I always took a picture when I saw one of these exquisite little flowers.

Below are two a pictures from the famous walk we will never forget from Leirvassbu to Spiterstulen Norway. In the tourist lodge at Leirvassbu we were told by one of the girls who worked there as a summer job that the walk to Spiterstulen was nothing, just a hop skip and a jump. It is in this valley that the two magnificent glaciers were at the time. The northern one on our left has a bluish-green break-off edge that made it truly spectacular.For some reason it does not show up in the picture below.

Soon after setting out  from Leirvassbu we found that the walking consisted of skipping from one stone to the next, all the stones surrounded by water. You had to be trittsicher (sure of foot) so as not to land a foot in the water. There were no Gortex mountain boots in 1982, We were very happy to get those in the early 90s, Italian Gortex boots that were also much lighter. Our first mountain boots were heavy as lead, but we were young and it didn’t bother us. (More photos and text about that trip to Norway in Chapter 29.)

Out of the endless number of gorgeous gentians we have seen in Brandnertal and Montafontal, this Purpur-Eenzian (gentiana purpurea) that we spotted on our way up on Breiterspitz at the southern end of Montafontal was probably the most strikingly beautiful. The funny thing with all these variously colored and different-sized gentians is how you can right away tell that a particular flower is a new gentian that we had never seen before. My most fun memory from Breiterspitz is how we didn’t find the path we had come up on as we were to head back down. We suddenly realized that we were on our way into the Swiss vcalley in the south. But our sense of orientation soon brought us back to the true path and we turned around and found the path heading north and down.

A walk that started at Lünersee and went uphill where the path turned east. I patted some cows and with some luck we saw some Murmeltiere if we heard their bird-like whistles. We climbed up to a path that could not really be called a path. In one place the path completely disappeared abd you had to find some piece of rock sticking out from the mountain that swallowed up the path. I was pretty scared the first time, but amazingly enough John, the Floridian was not. He held out a hand for me to grab hold of.

I got used to “the place where  the path  disappeared” though and we made this walk many times  — I don’t know how many.The walk was fun, and so was the rock climbing on the mountain at the end where you really had to watch where you put your feet. No path there at all. But, above all, the view from the peak was otherworldly.

As we crossed the field before the real mountain climb there were oodles of friendly sheep who used to welcome us in a neat formation. Sheep roaming freely on the mountain side, and hence of course Schatgafall.

In 1987 we hiked to Südschafgafall with our dear old Swiss friend, Edi, plus our German friends, Fritz and Renate. The weather was superb and we took some of our best ever photos of the spectacular view over the mountains to the east.

The green field that you crossed after the hairy spot was alive not just with sheep but with a multitude of various flowers, among them my much beloved purple klein Feldenzian (photo in Chapter 36 (Part 4) and the delicate AlpenTroddelblume or Soldanella. But then, in 1993, we hit on a mass of potentilla alpina (alpine anemone), whcih we now knew from our first hike to Gemslücke in 1991 (even if we did not exactly remember the name), it was a wonderful shock of recognition and joy. I just love those little white flowers that you don’t see often at all, and when you do it seems to be in stony places.

One of the cornerstones, so to speak, of not too strenuous but serious walks in Brand is the walk to the gorgeous Amatschonjoch. We take the chairlift, Niggenjopfbahn, up to Niggenkopf which overlooks Brandnertal from the west. There are many walks to take from the top of the chairlift, and one of our favorites was this walk to Amatschonjoch, a wide Joch (pass) that divides Brandnertal from the valley to the west.

On what was probably our second walk to Amatschonjoch we continued into the western valley on a somewhat hairy path, and then, one way or another, managed to get some transportation back to Brand. On the very edge of the Joch I remember seeing Troddelblumen (Soldanella), Alpenaster and lots of the purple little Feldkleinenzian that I still got to associate with Saulajoch.

There were three different approaches to the Joch, all of them beautiful paths, but somehow I think the higher altitude path that is called Golma-Steig the most beautiful. After an initial climb it goes on a bit up and down among trees and other exuberant vegetation.

At the very outset when you get up to the high level we found a mass of globeflowers (Trollius europaeus, thus in German Trollblumen). Since that day, globeflowers have been one of John’s absolute favorite flowers. We saw them in great numbers in fields here and there and we always try to take pictures of them. Hard to take a good picture of a whole field though. Tou can’t really see what this mass of yellow little balls is.

For the way back we usually prefer the one to the north, in Laurenzital. There are very pretty and high yellow gentians on Palüdweg on the south side of the ridge that is Golma-Steig, but the flowers and the cows with jingling bells are overwhelming in the Laurenzital.

That path, also called Bettlerweg ends up on Parpfienzweg that goes very close past the Parpfienzalp where we often stop for a cheese sandwich and a glass of unpasteurized milk. On the last piece of Bettlerweg you go by a lot of friendly cows that belong to the people in the Parpfienzalp. The wonderful sound of their cow-bells filled the valley.

A most delicate and beautiful orchid was the zweiblättrige Kukucksblume (Zweiblättrige Waldhyazinthe) we found in the very vicinity of our own Haus Kella-Egg, in one of the gorgeous flower fields on the far side of the Bach (brook) or else at the entrance of the forest that is right close by. The Allvierbach makes for a natural border for Brand village on its eastern side. We cross a field to get to the bridge that is closest to Haus Kella-Egg.

There are so many different kinds of orchids and they are so common, especially the red ones (see photo of orchid on left) that they have been called Knabenkraut, which sounds to me as if it might be a weed. Kukucksblume seems far more pleasant as a name.

That field has many memories for me since on every morning of August 8 I used to sneak out early to pick John’s birthday flowers. I looked most of all for daisies (chrysanthemum leucanthemum), but I mixed those with buttercups and bluebells. Also some red flowers if they were to be found.

The orchid on the right is a Gefleckte Kukucksblume, somewhat of a misnomen though, since there are no spots or stains. What you do see is delicate striations on the light pink petals. The gefleckte are also lighter colored than the ‘ordinary’ Kukucksblume; and they look far more delicate.

Another flower that we love both in the lowlands and in the mountains is the daisy, Marguerite, chrysanthemum leucantemum. The version we saw in the mountains, chrysanthemum alpinum, especially so in the Versettla region in Montafontal, the valley east of Brandnertal, is even more strikingly beautiful.than my very dear lowland version. On our walk to the top of the little mountain we suddenly hit on a hillside covered with these most exquisite flowers. We thought we had never seen those before, but I find from our picture albums that we found a few close to Oberzalim Hütte in 1981. But that was twelve years earlier and I must be excused for having forgotten about our very first view of chrysanthemum alpinum .