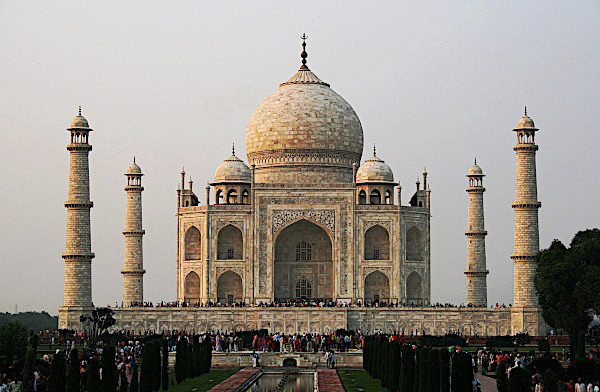 The Taj Mahal, completed in 1653 by Shah Jahan, the fifth Mughal emperor, as a tomb for his wife. Marble glowing in the setting sun.

India is so complex that it seems presumptuous to make any judgment or even imagine any suggestions for solutions to the tragedies that are played out daily in this nation that seems to thrive on inequality. Egalitarianism  would be a concept as foreign to Indians of all levels of the social spectrum as trying to make all faces the same color.

It seems as if India will always remain a country of almost unbelievable extremes, the way it always has been. See the Taj Mahal above, a mausoleum in white marble, and the pictures of the daily struggle for a somewhat decent living, as below.

Transport and and work are cheap — Delhi 2007 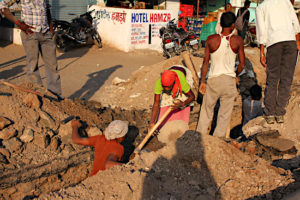 Even today when the caste system has been made illegal the caste division system still remains as forceful as ever. It hurts any normal non-Indian person to see Dalit women working on roads and construction site while male overseers stand by and do nothing.

But let it first be said that it is an anomaly that India is one nation, and as far as I can understand it, the merger of independent and very different kingdoms into one nation was a product of the rule of the British Empire. Their empire ignored these differences and their only goal was to put as many millions as possible under its realm. Rule Britannia, rule the waves.

There are, as I have been told, 23 different languages in India. In actual fact there are many more since in each language there are dialects which make communication problematic. Mumbai, to further complicate matters is divided into two language areas, dialects not even considered.

The people in the south are also, generally speaking, darker skinned than the northerners who originate from a very different migration into the area.  Northern Indians originate from what can be called the Indo-Aryan migration starting around 4000 years ago. They arrived from the Asian steppes north of the Black and Caspian Seas and the language they brought with them is the origin of the Indo-European languages.

They also brought with them the Vedic religion,  which bore the roots of the caste system. However, the system was greatly strengthened by the British starting in the 18th century as a means of control over the population.

Hindi, the language which is spoken predominantly in the northern states, is an Indo-European language, whereas Tamil, just to mention one example, is a Dravidian language, with an entirely different origin. One year, we traveled in Tamil Nadu, which is close to Sri Lanka, where the population is divided between the Tamil and people of another origin, which has caused severe mini-wars. When the Tamil-speaking people converse with northerners or westerners they have to speak English.

So, in the north, such as Uttar Pradesh, which we know best, when young people get their education, they first of all have to learn Hindi, since a majority of the people grow up speaking a dialect. Hindi is by far the most spoken first language in India (44%), and it is also the second language in many states.

It was, as far as I can sere, insanity by the British to make all of the Indian peninsula kingdoms into one nation. Obviously it had to create tensions, the major kind being due to religions — the most striking example being Pakistan and India.

“Partition”, the division between India and Pakistan when the liberation from the British Empire took place at midnight August 14-15, 1947. The immediate result was the displacement of 10-12 million people for religious reasons and perhaps as many as 2 million deaths, for the same reasons.

The British had brought people of different religions to live together, and, in some cases, it worked for a time; in others, it brought about disaster. As an example, look at what happened in Gujarat (in the northwest, right next to Pakistan) in 2002; the  2002 Gujarat riots, which ended in mass murder. There was an estimated figure of 2000 deaths, mostly Muslim. The Chief Minister at the time in Gujarat was Narendra Modi, the current Prime Minister.

Whenever violence of this kind occurs, we can be sure that it is always the government that 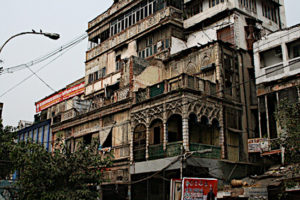 is the actor in the wings. Government-supported violence has become the order or the day throughout the world. And at least in the West, the violence is always blamed on the faceless “terrorists”. 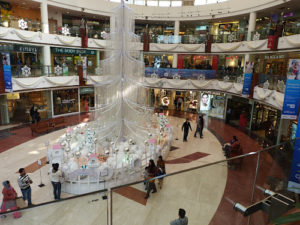 The posh commercial center in south Delhi. What a world of contrasts.

We have seen Christian churches and nuns dressed in white, mainly in Tamil Nadu and in Goa, the latter being a onetime Portuguese colony on the south west coast, the most blatantly touristy state in India. 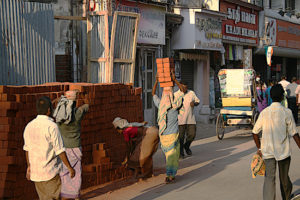 Many of the social problems in India today as well as yesterday, are a product of the Hindu caste system. There are four major castes and within each caste there are subdivisions that are taken into account in family relations. Marriage across the lines of castes is definitely not well seen and are probably most unusual events

From the Brahmins who are the clerics and generally the upper classes, university professors and the like, the four castes go down to the Shudra, who are the lowest rankled on the social ladder in India. 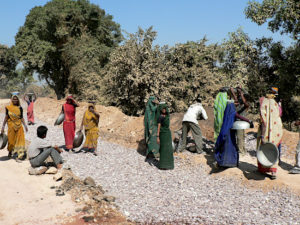 Dalit workers on the road in Panna National park, close to Khajuraho. The overseer sits by and watches.

Below even the Shudra are the Dalits, the castless or the Untouchables, who do the heaviest work and what is considered as too dirty for caste people to touch, such as dealing with anything that is connected with animals, from curing hides to dealing with dung. Cow dung is made into cakes to dry and is then used as fuel.

Dalits also do all the very hard and ‘demeaning’ work, such as working on the streets, men and women, with no protection for hands or feet and with rudimentary tools. I will never forget the dead look in a Dalit woman’s eyes who looked up at me, when we met a group of Dalits who were doing some roadwork in the Panna national park, close to Khajuraho.

It is a fact, however, that conditions are loosening up to a certain extent considering the plight of Dalits. They are by government law allowed to go to school. In fact, all Indian children are supposed to get an education, but what does a government law amount to, when children live in a village where there is no school? 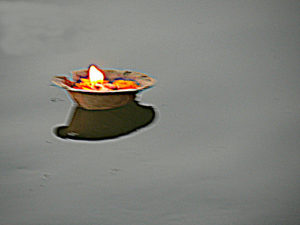 Candle in its cup that follows a wish for a loved one.

Or when parents keep their children from going to school because they need the money they make from begging or selling little trinkets, flower garlands or candles in a sort of cup that is to be placed on the Ganga, as we make a wish for a near and dear person.

In fact, the entire caste system has been declared illegal by the Indian Constitution. But how can anything ever get Indian people away from the deep-rooted customs and prejudices? Some very exceptional Dalits have managed to throw off the yoke of ceaselessness and have achieved important positions where they fight for the same rights for Dalits as for all other Indians. It is wonderful, but to cynical people it will be seen as a drop in the ocean. In practice

The best known of all Dalits who have managed to get out of their shackles is Babasaheb Ambedkar who after Indian independence in 1947 became India’s first Minister of Law and Justice, and considered the chief architect of the Constitution of India.