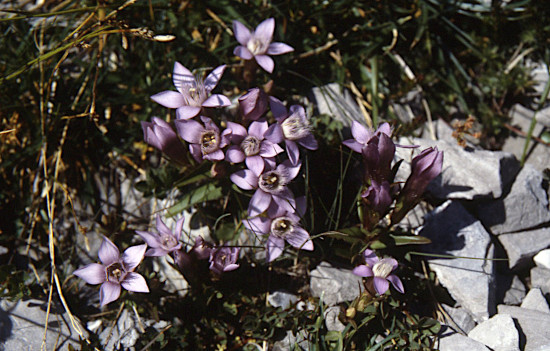 A gorgeous bunch of Feld-Kleinenzian, German gentian, on the way down from Totalphütte in 1986

We found masses of wonderful flowers in the mountains, which added a lot to our love  of our new kinbd of vacations. Most of those flowers we did not know before our Alpine days. And often even if we did know them, such as the pretty blue cornflower, the variations we found in the mountains were even more exquisite, larger or more delicate than in the valleys — violets, buttercups, daisies and many more. The Latin name for the ordinary cornflower, which I also like a lot, is Centaurea cyanus, The Latin name 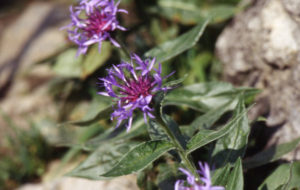 An almost blue Berg-Flockenblume on the way to Südschafgafall (most likely before you start the first real  climb.

of the blue (and sometimes more or less red) Berg-Flockenblume we see in the Alps — not very high up though — is Centaurea montana (Asteraceae). They look quite different, but I found it quite easy anyway to tell that rhose are siblings.

We right away bought a flower book — in German of course — and that explains why I often have the German name in the first place. Our dear friend Jim (nicknamed Mossy) in a wonderfully friendly gesture bought us an English mountain flower book, since he and Sandy traveled to England and Scotland after having been staying with us and even coming to Brand with us as well, in 1988. That helped us a lot. We found that Eisenhut was monkshood and lots of useful names of flowers in English. Thank you again, dear Mossy. We miss you. 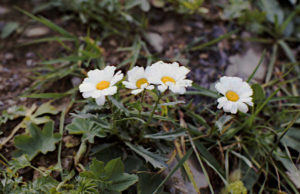 Cysanthemum alpinum, alpine daisy, which we came across close to Oberzalimhütte in 1981

Back to mountain flowers in Austria.

On the right is a photo from Oberzalimweg of four little chrysanthemum alpinum in 1981, which was the first time we saw these very special maguerites., Oberzalimhütte at 1889 m was one of our first walks direct from the valle — well, after we had gotten our mountain legs on easier walks. 800 m difference in altitude we found to be quite a big deal for us.

We had fled from Gargellen in Montafontal since it was so snowed in that we could not even walk to a nice restaurant in the village. We had to eat a vastly over-salted Zwiebelrostbraten mit Kartoffeln at our own hotel while a snowstorm was going on outside. After that evening I called Frau Königer (who later became Gerti to us) and asked if we could get to Brand one day earlier than planned. Yes, we could. We have rarely been as happy as that time to arrive at Haus Kella-Egg. There was a lot of snow up in the mountains, but none in Brand which is quite a bit lower in altitude than Gargellen. 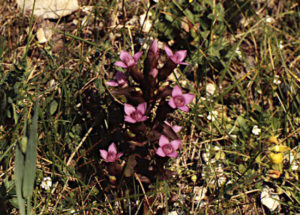 The most intense purple color for a Feld-Kleinenzian0 we ever saw — on the way to Schillerkopf with Froitz and Renate in 1985.

The  two kinds of flowers that were more or less new to us, and also striking in all the varied species we got to know, were orchids and gentians. Gentians from the tiny intensely blue Kleinenzian and the sweet little light purple Feld-Kleinenzian (photo left) to the highly impressive Purpurenzian (somewhat wrongly translated as ‘purple gentian’ since it is actually deep red — second gallery) and the more commonly seen ‘grand yellow gentian’ (second and third galleries). And grand it is. 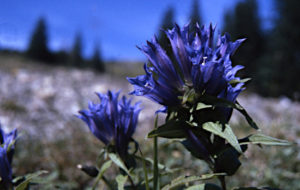 We learned to recognize a gentian, even one we had never seen — as it happened when, in Lorenzital in 1986, we hit on the intensely blue and big willow gentian, Schwalbenwurz-Enzian (Gentiana asclepiadea –third gallery).

Among the orchids, the ones you see most often are the Kuckucksblumen of various kinds, some very similar for some reason called Knabenkraut, a name which to me seems to indicate how very common they are. They are all orchids, Orchidaceae.

An orchid that we saw only in two places and that I found to be the most exquisite was the exquisite Schwarzrote Sitter, “royal or dark-red helleborine” (Epipactis atrorubens —  in second gallery), which smells of vanilla. The names are odd, since it is neither schwarzrot nor deep red, but names are names.  Once we found it on the way to the Jagdhütte in the Fluralp, and a couple of times we walked down the road to the little chapel close to the tunnel-like ‘gallery’, where we had been told we would find this to us unusual and beautiful orchid. And of course we did, but I haven’t found the photos I took there..

The ‘gallery’ was built over the highway to protect it from landslides, of which there had been several, some of them very serious. There was one in the early 90s that completely demolished the road, and we had to drive on narrow little forest roads east of the main road for that entire year to get to Bludenz or anywhere at all.. 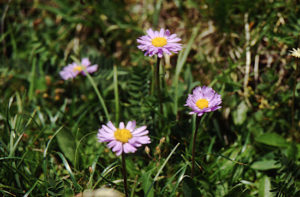 My wonderful Alpenaster, first seen in Saulajoch, and the also at Amatschojoch and other places, occasionally 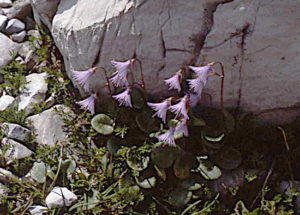 I will add to all the various gentians and orchids — all of them very special in their own way — the Alpen Troddelblume (Soldanella alpina) and the adorable little Alpen-Aster (Aster alpinus), which is a little more common than the Troddelblume, those are indeed among my most favorite flowers in the Alps.

Definitely not to be forgotten though, is the Ranunculus glacialis, isranunkel, Gletscher Hahnenfuss, glacier buttercupo. The most unexpected thing happened on one of our walks around Lünersee in 1985 when we hit on a Ranunculus glacialis. You just don’t expect to see them where there is no snow or ice close by.

The very first time we came across an isranunkel was at the foot of the last climb up to Saarbrückenerhütte in 1981. The next time we saw it was close to Totalphütte, also in ’81, not very surprising, but still a remarkable event. 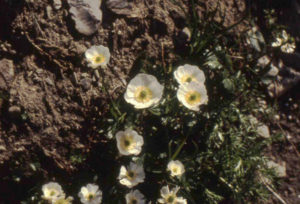 Then, one day in 1985, as we were walking around Lünersee, which was usually our first walk in Brand of any size at all, I spotted this little group of Ranunculus glacialis, Gletscher Hahnenfuss, up on a slope. I swoon every time I come across this exquisite and rare flower, and it always reminds me of my days of youth in the Lapland mountains with my family. It will always be isranunkel to me, no matter how many other languages I know of for this precious flower. The photo is a bit careless. I guess I was so excited I didn’t get the gorgeous flowers centered right. The best photo  I ever took of this rare flower was in 1981 at the Saarbrückener Hütte, and it is in gallery One in this chapter. 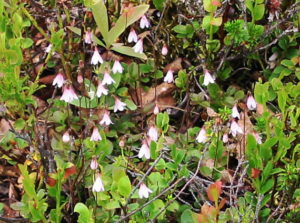 Orchids and gentians are fairly easy to recognize without any Linné-system botanizing.

For Non-Swedes he is Linnaeus, but for us Swedes he is, or was,  Carl von Linné, the amazingly adept botanic class and family organizer of the flora, mostly in Europe. (He was actually a medical doctor as well.)

One flower he gave his own name, the linnea, which I believe is not found outside Scandinavia. You will find it in the birch forests below the high mountains in the fjäll regions in Lapland, and it is not at all uncommon. Fjäll = the high and often snow-covered mountains in northern Sweden, and in Norway even on lower latitudes.

Flowers from our hikes in the 80s

In Montafontal in 1981 we had first been in Silbertal and we had made two memorable hikes, to Saarbrückenerhütte and to Tilisunahütte. From Saarbrückenerhütte we saw the only flowing glacier we ever saw in Austria. Two others we have seen were in the valley close to Galdhöpiggen in Norway (on a hike from Leirvassbu to Spiterstuen), in 1982, gorgeous bluish-green glaciers that have most likely today flowed into the valley as melted ice and snow. 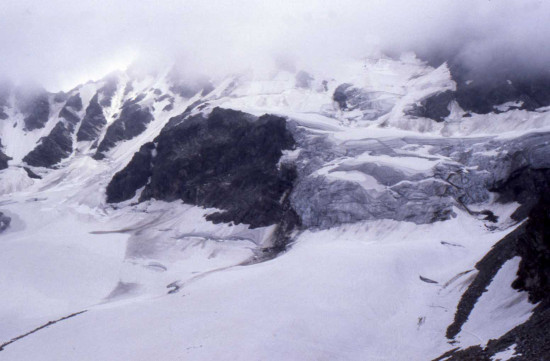 Zoom from Saarbrückenerhütte in 1981 over part of the mountain in the south, with the impressive glacier that continues in the snowfield in the foreground; indicated by the big crack in the snow/ice.

The two things that still today stand out from the walk to Saarbrückenerhütte were the adorable little group of glacier buttercups (ranunculus glacialis, isranunkel) and the wonderful view from the Hütte over mountains and an impressive glacier in the south.

On our trekking in the Swedish fjäll (high mountains) in northern Lapland in my youth, we saw ‘isranunkel‘ on and off, and it was always a big event when we did. And so it was in the Rätikon Alps. The same for the little blue-blue gentians, so blue that they practically call out to you. Gentians are not at all seen in Lapland in the masses and in all the varieties that we see in the Austrian Alps —  various blues, various yellows and various reds. John and I once talked to sister Gun about yellow or red gentians. Gun said No, gentians are blue. Well, that depends. In Lapland they are.

Back to Saarbrückener. A decade or so later, we got  back to Saarbrückenerhütte with Fritz and Renate but, very sadly, the glaciers were gone. We loved both walks, even though the way to Saarbrückenerhütte was a bit stony. We had to balance on big stones the way I remember it from Lapland with my family when I was 14. That was the day we saw the thousands of reindeer on the other side of the valley down below that we were following, and we said that the mountain was moving. 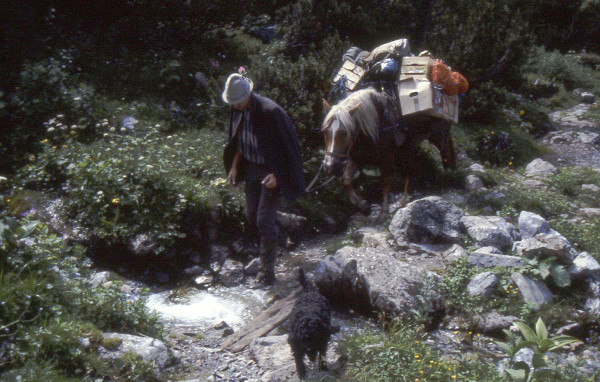 HISTORY– This man and his horse were replaced in the 90s,by a helicopter, which daily delivers goods to the Hütte high up at the top of Sarotlatal (6011  m). The man made the long and tiring trip every day with his tired-looking horse — for decades.

Miscellaneous photos of nature and flowers