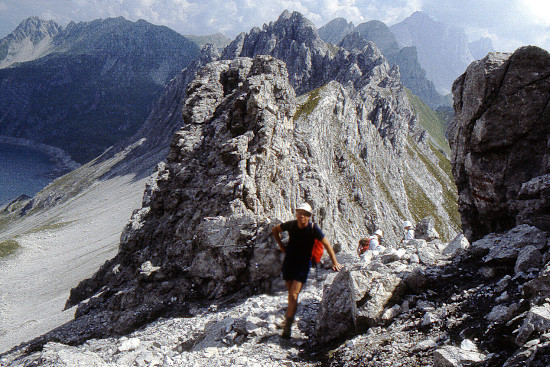 John at Gemslücke in 1991 We have arrived.

Our German friends Fritz and Renate Lange suggested a new trek for us in 1991 and so, one day in August we set out for the longest walk we had ever taken in the Alps — starting out round Lünersee, (after taking the Seilbahn up) and climbing the beautiful Gafalljoch (Gafall = slope) which is at the southern end of Lünersee, across the lake from Douglashütte. In later years we were going to make this Wanderung in the other direction by ourselves, starting out with the path to Totalphütte and coming back in the fairyland of the green Swiss valley.

Our first walk to Gemslücke with Fritz and Renate:

We climbed up and over Gafalljoch, which we once before climbed halfway in 1981 on our way to Lindauerhut. We then turned left (east) from the middle of Gafalljoch and walked parallel to the mountains separating Austria from Switzerland, the Kirchlispitzen and the Drusenfluh.

This time we entered this most glorious Swiss valley from the east. We turned west along the valley for probably a couple of kilometers before we got to the rocky climb up to Gemslücke. 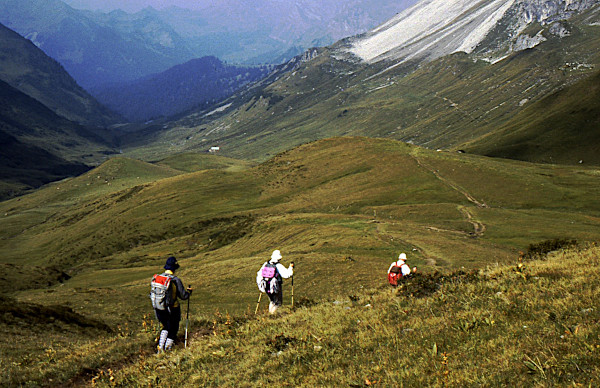 In the Swiss valley we are on our way to Gemslücke, with Fritz and Renate.  John. took the picture. Snow on the mountain side.

Renate chided me for talking as we were climbing. She said that you must be silent when you climb. OK, of course she was right, and I am just a chatterbox. Fritz was at the head and Renate and I came behind him. John took all the pictures on this stretch and he must have been the last one of the quartet. There were of course cables to hold on to when the rock climbing began. They were actually even more needed when you go down than up. Still they were very useful.

Gemslücke really is a hole (Loch) in the range of craggy mountains separating Austria from Switzerland, with one huge rock on the eastern side of the Loch, Lükke, Luggen, lucka (Swedish), hole. The views from Gemslücke were fantastic. The most otherworldly view in my opinion was the green-green Swiss valley towards the west, one mountain dominating the valley, a shock of peaceful beauty. I had never seen greener mountains and valley. What a contrast from the Swedish bare mountains which, in my time, often had some snow at the top or along the sides. 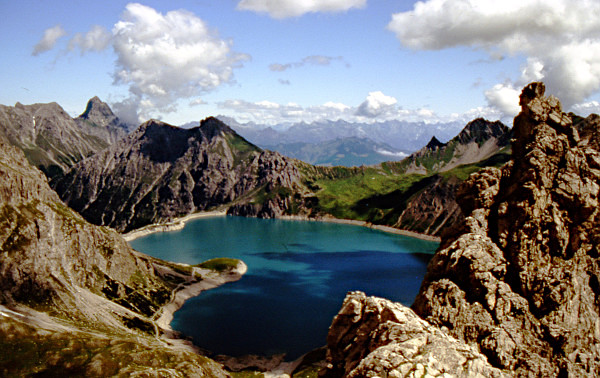 After picture taking at the Gemslücke we continued down to a convenient place for lunch. John went to sit on a rock looking out over Lünersee. On our continued walk over scree and rocks we marveled at all the flowers and luscious moss growing among the rocks on the Totalp. 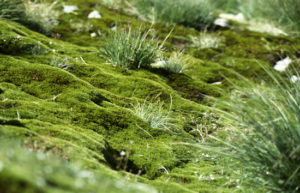 Moss in with the rocks in the high mountains

We could hardly believe the thousands and thousands of Silberwurz (mountain avens), which we usually associated with Saulajoch. It was overwhelming. Small somewhat pale bluebells and violets always joined to some rocks; carpets of Mannschild in a deep pink, masses of yellow Zottige Gemswurz, which we see in large numbers down around Lünersee; intensely green moss of varying kinds between the rocks. And the list goes on. 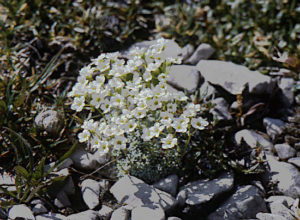 Most of all we were absolutely delighted to see the adorable little alpine pulsatilla (anemone ranunculaceae) that we had already seen on that same day in the valley, just where we started the rocky climbing. This delightful little pulsatilla was a newcomer  for John and me. in our steadily building mountain flore happy and most varied collection, from the most varied gentians to all the different kinds of orchids.

When you get close to Totalphütte there is a climb at the end of the trek from Gamslücke over the Totalp, the two being more or less at the same altitude. However, since the walk goes quite a bit up and down over rocks and scree, it is quite a hike allthesame. Then, once you get to Tptalphütte you still have the pretty tiring 400 m. walk down the zigzag path to Lünersee.

In the following gallery you will see more of my favorite pictures from the next two or three walks to Gemslücke, then just the two of us.

Actually, in 1995, there was also a group of three mountaineers who climbed straight up on the back of the mountain from the Swiss valley where there are no cables. It looks possible all right, but not for us. 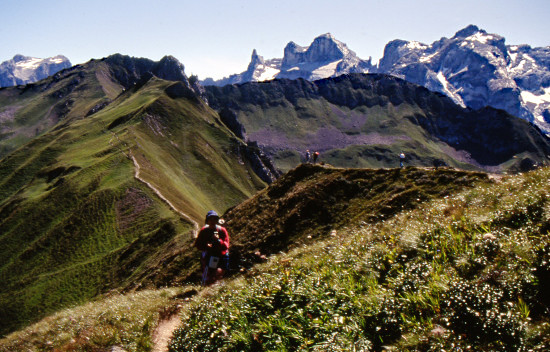 The peak of Geisspiyze and, in the background, die drei Türme. Siv on  the way back — 1993

Geisspitze is a long story. It began with a letdown because of a wicked wind that we had not counted on. Fritz and Renate  were coming along with us in 1992, and I remember Renate being so upset she sat down leaning against a rock declaring that she would not walk one step further. We had walked up and down the first three hills on Golmer Höhenweg when Renate suddenly decided that she would not have any more of it. We all turned back, since she was clearly right. But we never took the hilly path back but walked through the valley, which is first down and then up, but far less strenuous than the three hills.

This was as far as we got on that first attempt to reach Geisspitze in ’92. Fritz and Siv just above the Hätebergerjoch.

We tried Geisspitze again, just the two of us, in 1993, and it was a success — mostlly. The problem was that my feet got so sore I could not walk up on the last ridge to the peak After that incident we learned from Renate to wear soft cotton socks inside the woolen socks. It makes all the difference in the world.

I sat down on the Joch below, took off my Bergschuhe and waited for John to get back down. The Joch has a view of Lindauerhütte down in the valley, which we remembered with mixed feelings — by the way, I see online that there is now a real sport hotel there, so no more problems with Matratzenlager on the floor.

Also from the Joch as well as from the mountain peak of course, there was most of al, a superb view of die Drei Türme (the three towers). This is the place to go to if you want a splendid view of these wildly stunning peaks.

When John got back down, we had our lunch and rested some more. However, the walk was so wonderful and fun that it was, in spite of it all, a great day. It was a wonderfully sunny day and there were quite a few people up at the top of the mountain.

The path to Geisspitze, as I see it, can be divided into three sections. The Golmer Höhenweg begins after you get off the Golmerbahn with a walk up and down three pretty high hills. The Golmerbah is in Montafontal, the valley directly east of Brandnertal. It is a gondola lift and then after a sharp bend you change to a chairlift. In 1995 it replaced the cogwheel ‘train’ that was there in ’92 and ’93. On your right from this up-and-down path there is a craggy mountain range with Zimba standing out as the center piece.

John at Hätebergerjoch, and the zigzag path down to the valley is clearly seen. Zimba in the background.

When you get to the end of the three hills there is a crossroads that is called Hätebergerjoch and the path that goes on from there at the top of a narrow ridge is probably what is called the Hätebergerweg. This is what I see as the second part of the path to Gausspitze. In 1996 it was at this Joch that it became very clear that a storm was brewing and F&R turned back to the Golmerbahn to wait for us.

There is a wonderful field of mixed flowers on your left going, with lots of globe-flowers among them. Globe-flowers are probably John’s favorite flower, or one of them.

On this path you walk around the base of Wilder Mann, a wildly impressive mountain on your right, a bit lower than Geisspitze, which is 2334 m. The end of the Golmerbahn  (first gondolas, then a chairlift) is at 1890 m. , but since there is so much up-and-down walking, the entire trek was quite a big deal — for us. 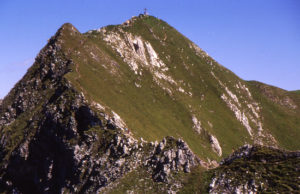 The very last climb up to the top of Geispitze.

The third part is walking from the Joch where I sat waiting for John in 1993, while he climbed up to the peak. That last leg of the walk looks much harder than it really is. Sure, you do walk on a narrow ridge, but there is nothing scary about it, as long as you are schwindelfrei (no fear of heights). In fact you must be schwindelfrei, trittsisicher (sure of foot, as we kiddingly call it — and ein geübter Wanderer.

In 1996 we had also learned to wear soft socks under the woolen ones, and there was no problem with sore feet.

ngg_shortcode_2_placeholder” order_by=”sortorder” order_direction=”ASC” returns=”included” maximum_entity_count=”500″]All three times we took the lower path in the valley back to Golmerbahn from the crossroads where you have a choice between the high road or the low road. Of course you want the low road, so you walk down a zigzag path and then up close to the Bahn. In 1993 we saw an entire Murmel family (groundhog) who had their home at the very beginning of the valley — adorable little animals that we have seen many times  in Saulajoch and also farther down on the way to Lünerkrinne from Lünersee. You hear a bird-like whistle and that’s Murmeltiere. We were able to took at them closely in ’93 with a pair of wonderful light-weight field glasses I had given John for his birthday one year. His birthday on August 8 was usually during our vacation in Brand. The Murmeltiere  were so funny we watched them playing and running around, coming out of a hole and going back into the hole, almost as if they were performing for us. With a lot of bonne volonté you may be able to see them in my pictures. At least the two grown-ups. 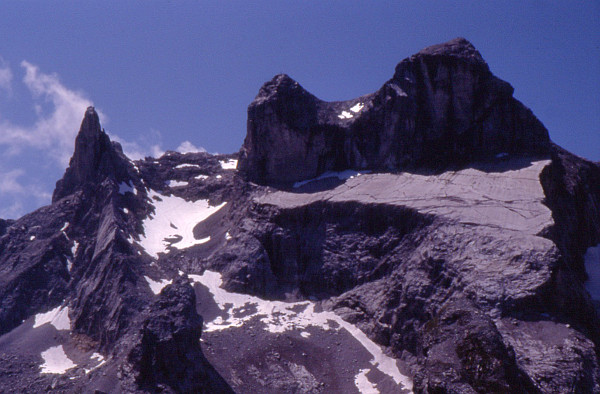 The majestic Drei Türme overlooking the valley of Lindauerhütte and best seen from Geisspitze.

In 1996 we knew all the time that a storm was coming, and wow did it come! As we got down the zigzag oath to the valley the bottom fell out of the sky. We had by then got our rain tents out from our backpacks and we hurried back through the valley to the top of Golmerbahn where Fritz and Renate were waiting for us. There was not just a cloudburst but also thunder and lightning, but it wasn’t much of a big deal. It was more like fun, running through the valley. We were not exactly laughing though, just hurrying along. No Murmeltiere this time.