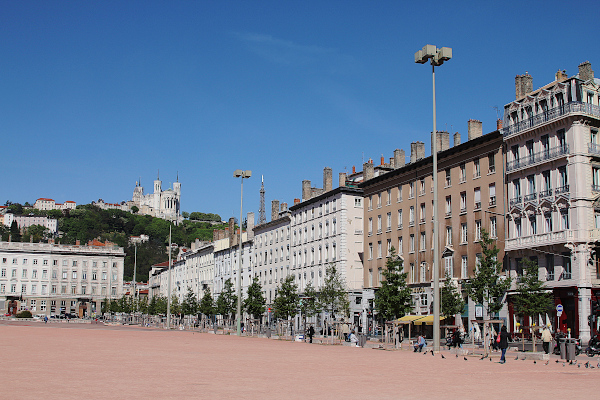 More about Lyon, history and more.

In  the days, when our friends Jürgen’s and Ruth’s daughter, Clara, was a little girl and then a young girl (she is now a young woman) and there were numerous interesting places in and around Lyon to visit, it was always a great pleasure to have company for New Year’s. We also managed to stay up past midnight back in those days, which we just don’t do any more.

We always spent Christmas Day with our oldest and best friends in this part of the world, Jean and Danièle Porta, who used to live close to Lyon. — Things have changed since those happy days when we had a group of happy friends, from around Grenoble mostly. The two women I felt closest to were Geneviève Nespor and Astou, from Dakar, Senegal married to Kilé Traoré. These days we mostly see Kilé and Astou at funerals and the like. There have been many. Danièle’s mother was one of the last ones, and then Danièle herself who died in a vicious case of breast cancer, which turned off her light in just three months. We saw her in the hospital one day and she died the same day in the evening. She was beautiful, looking like a young girl. This was less than two years ago, and I now have tears in my eyes.

For many many years we even had the big Christmas dinner at Danièle’s mother’s, Lili’s, home in Lyon where sometimes up to three of her aunts were also present.This had been Danièle’s mother’s and aunts’ home even during the war, when they were active in the resistance. However, since then the entire quartier has been wonderfully renovated and beautified. Lili’s home was a small 4-room apartment with a small kitchen, all rooms very small. During the war it was the home of the entire family, five children and the mother, after the father died at their farm in Burgundy. The entire family participated in the Résistance, except Germaine, the youngest of the sisters, and there was also one brother. In those days there wasn’t just the family of six but also any homeless body who was escaping from the Gestapo, usually other resistance fighters.

We had many many Christmas dinners at Boulevard des Etats-Unis, Lili’s home, and there were all the aunts assembled, maybe with the exception of the one they called Clo-Clo. I never knew her real name, but she usually showed up after the big meal to say Merry Christmas, or rather Joyeux Noël. One aunt lived on rue de Tolbia in Paris, close to where we used to live for ten years, but we never got to know her.

And, most importantly there was Olivier and his wonderful wife, nicknamed Prune. We know them well, and they are like family to us. They have four boys, the oldest now a young man. I will never forget when Prune one Christmas changed Roman’s diapers at Lili’s place, and she did it with so much love and tenderness that I thought to myself: This little one must grow up and become a strong and secure young man. We will in fact see them any day now in their very nice restaurant, which they are planning on selling and starting a real estate business instead. Prune has an MBA and they could certainly do a good job that way. Olivier is smart and has a very nice personality. So we will see what happens during the next few months or so.

Back to Clara who very tragically was born with a birth defect due to the carelessness of the midwife who was out in the corridor smoking when she was needed.Clara grew up to become bilingual since she spoke German with Ruth and Jürgen and French in her special school, because of her birth handicap, which is essentially muscular. Now she lives in Munich during the year in a special apartment with other young girls who are also handicapped. She only spends a week or so with Jürgen during the end-of-year vacation, after having spent Christmas with Ruth and husband Christian in Autrans, west of Grenoble.

So it has become clear, mainly since Jürgen does not have a car any more, that it would be too tiring for everybody to take the train to Lyon with the equipment Clara needs.

Jürgen spends half his time with Clara in Munich and half his time in Paris, which is by far his favorite city in the world. They also spend a lot of time with Jürgen’s family in Lermoos, Tyrol, and both of them love to spend a lot of time there in the summer. In the winter, however, when there is a lot of snow, the things Jürgen can do outdoors with Clara are limited and so they used to come to Lyon and go for walks or take trips by car on snow-less roads to one of the many interesting places close to Genas.

Lyon is a city with a lot of remarkable historical sites. It is beautifully located on the two rivers le Rhône and la Saône, with the downtown Presqu’île (peninsula) between the two rivers. 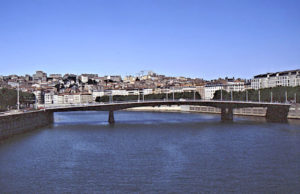 Le Pont Alphonse Juin spanning la Saône and leading to ‘Vieux Lyon’ on the left from the ‘Presqu’Île’.

Lyon has many Renaissance monuments and buildings and also Roman amphitheaters and a Gallo-Roman museum, other art museums and a museum for what was once the main product exported from Lyon, namely silk, treated and woven by les Canuts (more about this below).

There is also a very good opera, even though John and I don’t like it because of its obnoxious architecture, especially the interior. As I have said somewhere earlier — it seems to me like a cross between a bordello and a warship.

Back to les Théâtres Romains de Fourvière, the Roman amphitheaters, very well preserved and restored, where inJune and July there are often opera performances. And not to be missed is the incredibly beautiful Gallo-Roman museum at the top of the Fourvière hill on the west side of the Saône, right next to the amphitheaters. Probably thousands of people assembled to see and hear Woody Allen and his band.

In the summer you often see the stage at the big amphitheater set for a play or an opera. Les Nuits de Fourvière have become internationally known events. We were there in 2013  with friends to hear Woody Allen play his clarinet with his New Orleans Jazz Band. Great event for New Orleans jazz lovers. [2. “Year on year, driven by its director Dominique Delorme, the festival Les Nuits de Fourvière asserts its desire for daring and originality. Behind its conventional aspect a vast array of initiatives are to be found, all contributing to a rich two-month programme (theatre, classical music, dance, rock, world music…)” Nuits de Fourvière ]

Lyon was at one time the capital of a region of the Roman empire, Gallia Lugdunensis, — ‘Lugdunum’ at that time, meaning ‘fortress’. The ‘gd’ clearly got softened (mouillé) into a ‘ye’ sound. The Latin ending ‘um’ (or ‘us’ or ‘a’) always gets dropped in French and usually becomes a non-pronounced ‘e’. So we have something like Luyoun, and we are not far from Lyon. 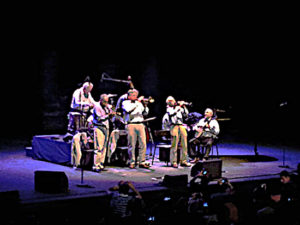 La Maison des Canuts is a museum on la Croix Rousse in the 4th arrondissement, north of the Presqu’Île. There you can see the way the Lyon silk workers (called les Canuts — etymology uncertain) worked when their industry flourished in the 19th century. Silk had been manufactured in Lyon ever since the Renaissance, but it became an important industry in the 19th century.  Les Canuts lived so poorly and worked so hard that there were at least two major rebellions in the 19th century, which were brutally put down by his Majesty’s troops and cannons.

So the ancient network of trade routes that were called the Silk Road and that connected the East and the West through all of Asia ended in Lyon, among other places.

But let us above all not forget le Vieux Lyon where we always take friends from abroad, or from Paris, on a pleasant walk and a meal at one of the little Lyonnais restaurants called ‘bouchons‘ (for an unknown reason), where the typical and very heavy lyonnais food is served — but less and less so now. It is highly fatty food from cow stomachs, tripes, andouilettes and even pigs’ feet, called lyonnaiserie. It does not do much for me, but John likes it.

…And Lyon goes on

The architecture in Vieux Lyon is very much Italian-inspired since the region dates from the Renaissance era when masses of Italians immigrated to Lyon. Innulerable Italian names are still found today in the Lyon area.

It’s a marvel to wander around la rue Saint Jean from la cathédrale Saint Jean towards the church Saint Paul and then back on la rue du Boeuf and la rue Juiverie, cobble-stoned streets with the gutter in the middle and no cars. There are numerous remarkable courtyards surrounded by Italian-style buildings and small towers. And there are les traboules that are a very typically lyonnais feature, covered passages that lead from one street to a parallel one under beautiful Renaissance buildings and small coutyards 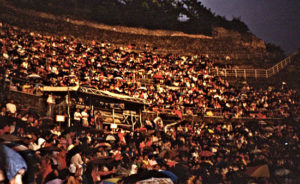 And there is Vienne, also an old Roman city south of Lyon, at about one good hour’s drive towards Marseille on l’autoroute du Sud. Here we have the really gigantic Théâtre antique, a huge amphitheater that dates from the first century CE, and holds 8000 people. They organize regular jazz festivals every year. It’s a miraculous show and we were there at least once in 1990 with four very good friends to see and hear Dizzy Gillespie and his band. It’s quite a story since we were seeing storm clouds moving in from the very beginning. The storm broke and I have rarely been as thoroughly drenched as that evening. 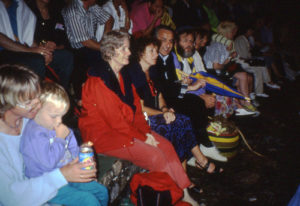 Photo taken just before the big downpour hit us. From left, Siv in red, Danièle, Jean, Claude and Geneviève.

We also usually take our friends and families to see le Beaujolais, a vineyard region south of la Bourgogne (Burgundy). The best time is in the fall when the leaves turn orange and red. Hillsides after hillsides covered in fall colored vine leaves is an amazing sight. We make it a day excursion and have lunch in a pleasant restaurant somewhere. There are many of those, but we have a favorite one where we eat outside under huge plane-trees that give shade on a warm summer’s day.

There are also numerous historical sites close to Lyon, other than Vienne. Just about half an 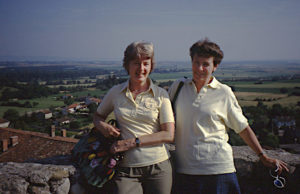 hour’s drive east of Genas where we live is one of the most see-worthy places — la cité de Pérouges, an enchanting medieval town where, obviously, you park your car outside the city gate and then you walk on the cobble-stoned streets. It is such a historical and beautiful little town that I think I might be excused for bringing it up again.